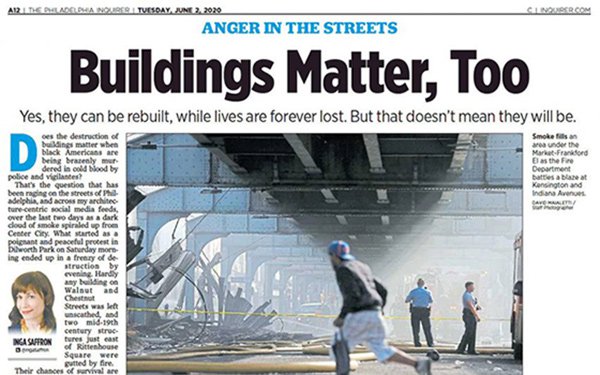 The Philadelphia Inquirer has made changed its coverage of race, after a year-long review of its practices.

The analysis was prompted by a headline published last June 2: “Buildings Matter, Too.”

“If printing those words in 72-point type had occurred in a vacuum, it would have been a grievous and unpardonable offense,” writes Elizabeth H. Hughes, publisher-CEO of the Philadelphia Inquirer.

“That it was published at a moment of national reckoning over social justice — prompted by the vicious murder of George Floyd at the hands of the police a year ago yesterday — amplified the outrage and brought us well-deserved scorn and scrutiny,” Hughes continues.

Like many big-city dailies, the Inquirer has overemphasized crime and been racially insensitive in its coverage, Hughes said.

Roughly 80 team members, more than one-third of the newsroom staff, met weekly in working groups in an effort to make the Inquirer “an anti-racist news organization,” Hughes adds. All of their suggestions were adopted.

Specifically, the Inquirer has:

Hughes concedes: “There is something of a playbook whenever a self-inflicted crisis like this threatens to define any institution and the people who work for it,” Hughes writes of the offending June 2 headline. “And so it played out here. Apologies were issued, a change in newsroom leadership was announced, earnest promises of reform and redress were made.”

Other newsrooms are doubtless conducting analyses of this sort, to one degree or another. They do so in a heavily politicized time, when newspapers are fighting for their survival.

“A lot remains to be done — and there are likely challenges ahead that we can’t anticipate,” Hughes says. “But if reckoning requires a commitment to change and a clear path to reach it, then I hope you agree that our progress in the last year is tangible proof of both.”