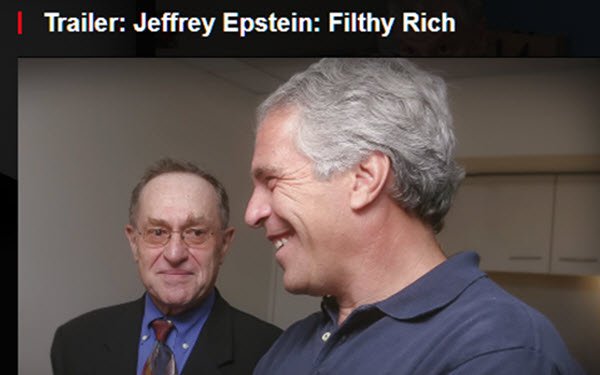 The complaint -- filed in Miami federal court on Wednesday -- alleges that Netflix misled Dershowitz, who was interviewed for the series, intentionally left out evidence that he says exonerates him, and defamed him by falsely claiming that he had sex with Virginia Giuffre, one of Epstein’s victims.

The four-part series, “Filthy Rich,” based on James Patterson’s bestseller, debuted on Netflix in May 2020 (promotional image shown above).

Netflix has released a statement saying that Dershowitz’s suit is “without merit,” and that the company “will vigorously defend our partners and the series.”

Epstein was arrested in July 2019 for sex trafficking and hanged himself in a federal jail cell about a month later.

About a decade previously, Dershowitz was on a team that represented Epstein in a case in which Epstein escaped a federal indictment in return for pleading guilty to state prostitution charges in Florida, registering as a sex offender, and agreeing to settle suits from his victims.

In 2020, Dershowitz was one of the attorneys who represented then-President Donald Trump during Trump’s first Senate impeachment trial.