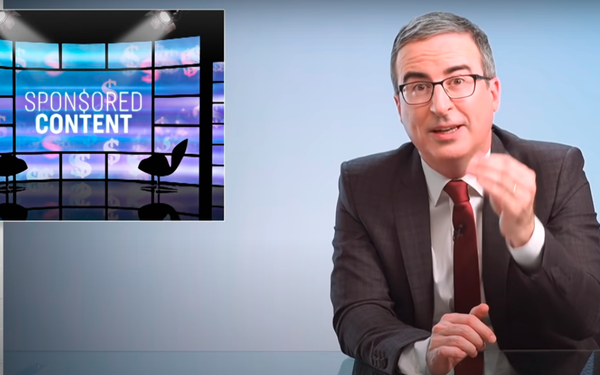 Comedian John Oliver this week slammed local TV stations for airing advertising disguised as news programming in an episode of HBO's "Last Week Tonight" that mocked sponsored content. The show included a prank to embarrass broadcasters, but any publisher that sells native advertising could just as easily have been a target for mockery.

To demonstrate how "easy" it is to trick producers of sponsored programming that resembles news, Oliver and his team set up a fake company called "Venus Inventions" to market the "Venus Veil," which was billed as "the world's first sexual wellness blanket." They created a website for the product and hired an actress to be the on-air spokesperson.

Three stations that air sponsored programming -- KTVX in Salt Lake City, KMGH in Denver and KVUE in Austin, Texas -- ran segments about the blanket after being paid amounts ranging from $1,750 to $2,800, Oliver said. Each segment featured an interview with the fake spokespersonwho spouted pseudo-scientific jargon about the product's health benefits.

Watching the clips from those interviews, I marveled that the stations could be so accepting of the dubious claims about a fake health product. After the show aired, KMGH owner E.W. Scripps and KVUE owner Tegna said they would review their vetting processes, while KTVX owner Nexstar wasn't available for comment, Deadline reported.

“As we've said for years now, the integrity of local news is crucially important. There is real harm for everyone if that integrity is damaged,” Oliver said.

It's hard to argue against the importance of the integrity of local news, but it's also not clear how pervasive the problem of deceptive branded content is among broadcasters. They face significant legal liabilities and potential fines for violating laws against deceptive advertising, which are strong deterrents.

While Oliver targeted local TV stations for their policies on branded content, he could have just as easily pulled a similar prank on publishers.

Sponsored content is practically everywhere, with advertisers spending billions each year on native advertising. With many publishers selling native ads through open programmatic exchanges, vetting sponsors can be almost impossible. Oliver could easily run native ads for the "Venus Veil" across the web, and quite a few of those sites would happily accept his bid.