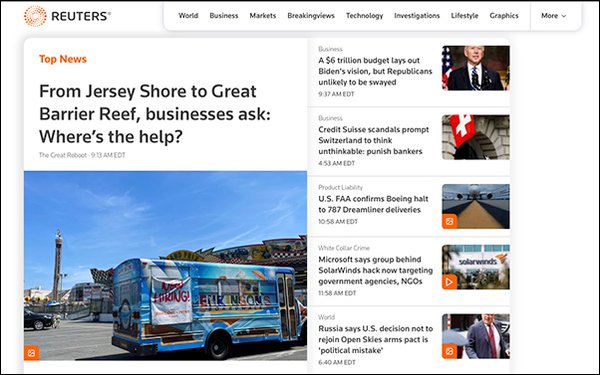 The Reuters News paywall announced last month is on hold, due to a dispute with former Thompson Reuters sister company Refinitive.

Reuters reports the plan to start charging $34.99/month for content June 1 has been postponed as the two sides negotiate a resolution.

Editor-in-Chief Alessandra Galloni informed staff on Thursday  the paywall launch was stalled, along with the start of a new legal news section on the Reuters site, Reuters reports.

The dispute apparently is over a deal Refinitive has with Reuters for content.

When they separated in 2018, Reuters and Refinitiv signed a deal that guarantees Reuters at least $336 million per year for providing content to Refinitive. That constitutes roughly half of Reuters’ total revenue, the news service said in April.

The agreement lasts until 2048.

Refinitiv competes with Bloomberg and other news and data providers to banks and other financial institutions.

A Reuters spokesperson says: "We are still working through our plans for the relaunch of Reuters.com as a subscription service. The discussions with Refinitive concern our business approach and products, and how we can enhance our offer to all customers.”

"The foundation of our partnership is strong and we will continue to work together to deliver for all of our customers,"  London Stock Exchange Group stated, according to Reuters.

Reuters is one of countless news organizations that have instituted paywalls for digital subscriptions, including major newspapers, such as The Washington Post and TheNew York Times.

Reuters’ competitor Bloomberg News charges $34.99 per month and The Wall Street Journal, the first to launch a paywall, in 1996, bills $38.00 per month.