This Was The Captain Speaking: My Interview With Gavin MacLeod 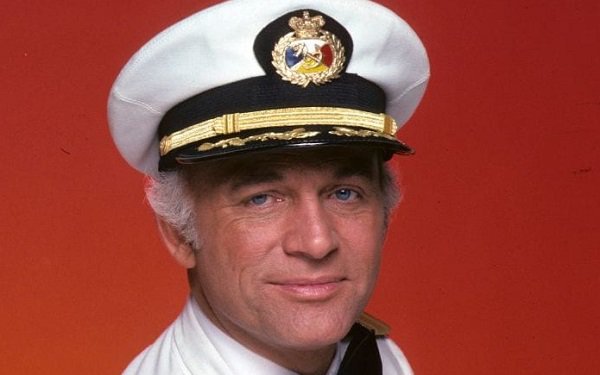 Gavin MacLeod’s own career in Hollywood was not always smooth sailing, although he starred in two seafaring TV series -- “McHale’s Navy” and “The Love Boat” -- and appeared in at least one notable naval movie, “The Sand Pebbles.”

It is difficult to decide which of his TV roles made him more famous -- the put-upon, “brown-bagging” (as he put it) TV news writer Murray Slaughter in “The Mary Tyler Moore Show” or Capt. Merrill Stubing, beloved skipper of “The Love Boat.”

In a memoir published in 2013, MacLeod, who died last Saturday at age 90, gave the nod to “The Love Boat,” even if “The Mary Tyler Moore Show” is more revered today than the frothy ABC series about the lives and loves of the passengers and crew aboard a cruise ship populated with dozens of famed guest-stars.

In his book and in a phone interview I conducted with him around the time of the book’s publication, MacLeod likely gave the edge to “The Love Boat” because he was the show’s top-billed star, and also because the role of Capt. Stubing was the one that more people referenced when he met them.

Everyone remembered and appreciated his role as part of the ensemble cast in “Mary Tyler Moore” that made television history. But they loved Capt. Stubing and “The Love Boat” even more.

His preference was evident in the very title of his autobiography, which was This Is Your Captain Speaking: My Fantastic Voyage Through Hollywood, Faith & Life.

The voyage was not always fantastic, however. Among other things, the book detailed his struggles with alcoholism and depression. Although he appeared to find success rather quickly in character parts in movies and television in the 1950s and ’60s (he studied acting at Ithaca College and graduated in 1952), his looks made him feel insecure.

“I look back at my career -- being bald when I’m young, having these kind of short legs …,” he said wonderingly when I interviewed him.

One of the lowest points of his life was the time he considered committing suicide, which occurred while he was working on “McHale’s Navy.” Paradoxically, the sailor he played on the show was named Happy.

His supporting role on “The Mary Tyler Moore Show” raised his profile immeasurably and led to the role of his life as Capt. Stubing.

In the show’s nine-season run (1977-86), it became famous for the tonnage and incredible variety of its guest-stars, many of whom were drawn from the ranks of aging movie and TV stars.

Some of them had not been seen in any movies or TV shows for decades. They are much too numerous to attempt to list here. The Internet Movie Database lists 552 of them.

As the captain of “The Love Boat,” MacLeod took up a leadership role on the show’s set. “As the captain, I would greet [the guest-stars] and welcome them,” he said. “I just pinched myself every single day on that show thinking what a gift it was to be able to meet these people. And a lot of them hadn’t worked in 25, 30 years.”

Not much in the way of quotes survives from my interview with MacLeod. The story itself, published on an entertainment-news web site in 2013, was shorter than this TV Blog.

I remember that I liked him a lot, and that he was an ebullient interview subject. He was a man who felt very grateful for the life and career that he had been given an opportunity to have.

He was excited about his book. “My life has taken one incredible turn after another,” he wrote in it. “I’ve gotten to do what I wanted to do. I’ve been a captain! I’ve been given this incredible gift of life. … I’m sharing my story here, the fun parts and even some not-so-fun parts, in the hopes that maybe someone will take a nice walk down memory lane with me -- and maybe I’ll even give someone a little bit of hope.”