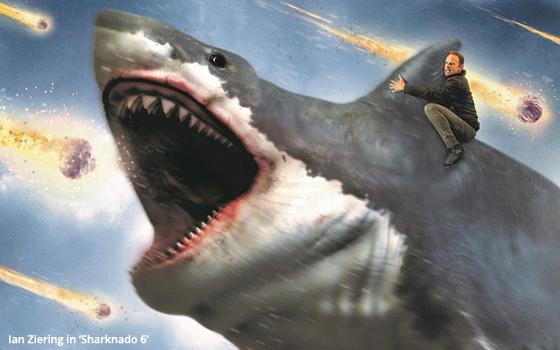 Since 2013, summer TV has been a spectacle of whirling, swirling, airborne sharks that were flung ashore with deadly consequences by a series of super-tornados.

But this summer, there is no sign that the campy, gory “Sharknado” movies, or any of the other outlandish horror hybrids for which Syfy had long been famous, will get their annual chance to shine in the summer sun.

It has long been confirmed that the last new “Sharknado” on Syfy -- which was literally titled “The Last Sharknado: It’s About Time” when it premiered in summer 2018 -- would indeed be the last of the series. As always, the star of this “Sharknado” movie -- the sixth in the series -- was Ian Ziering (pictured above).

But as recently as last summer, Syfy lifted the spirits of a grateful, pandemic-stricken nation in need of lighthearted entertainment when it mounted a week-long festival of its most beloved shark-attack movies. The event was dubbed “One Last Bite of Summer.”

Not only were all six “Sharknado” movies on the schedule for this one glorious week last August, but also about two dozen other ones, including such classics as “Sharktopus,” “Roboshark” and “Jersey Shore Shark Attack.”

This summer, however, there has not been a peep of publicity from Syfy about any similar plans in July or August. Moreover, a glance recently at the Syfy press site revealed that it has been scrubbed clean of the “Sharknado” movies, and all of the other ones too.

If uncertainty surrounds Syfy’s future in the summer-shark space, TV’s other two players in summer’s shark-infested waters are swimming full-speed ahead into their own annual shark-a-thons.

They are, of course, Discovery Channel and National Geographic. Discovery is the granddaddy of TV shark celebrations with its annual “Shark Week,” which has been a rite of summer since 1988.

This year’s Shark Week runs from Sunday, July 11 through Sunday, July 18, with a full complement of sponsors, according to Discovery and our own story in Television News Daily .

This summer’s “Sharkfest” on NatGeo will be the ninth annual shark showcase for NatGeo and co-owned NatGeo Wild. NatGeo’s shark programming this summer will be seen for six weeks starting on Monday, July 5 -- an increase of one week over last year’s five-week Sharkfest.