Google Should Be Considered A 'Common Carrier,' Ohio AG Says In New Lawsuit 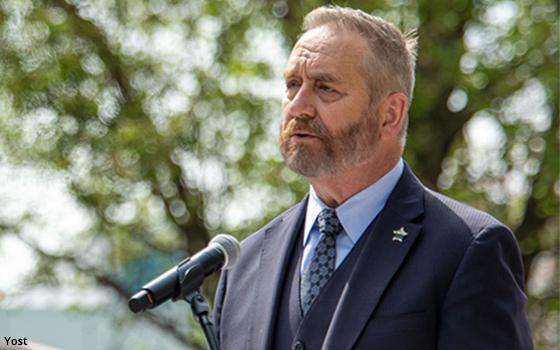 Ohio Attorney General Dave Yost is asking a state judge to declare Google's search engine a common carrier and prohibit the company from prioritizing its services or products in the results.

In a lawsuit filed Tuesday, Yost, a Republican, alleges that Google dominates the online search market, and should therefore be considered a “common carrier” under Ohio law -- comparable to a gas or electric company.

Yost adds that Google “intentionally disadvantages” competitors by touting its own services and products on the search results pages.

“An entity may be characterized as a public utility if the nature of its operation is a matter of public concern and if membership is indiscriminately and reasonably made available to the general public,” he alleges in a complaint brought in Delaware County Common Pleas Court.

“Google often presents Google products in enhanced ways in the search results that are designed to capture more clicks, including by integrating other Google business lines -- such as specialized searches -- into the results page,” he adds. “It does not allow competitors to have similar access, thereby violating its duties as a common carrier.”

Yost alleges that Google's search results direct people to its own services, pointing to a study that says around 65% of searches on Google desktop and mobile ended without clicks to a different company.

Google said earlier this year that the study's methodology was flawed, partly because it didn't take into account that search users are merely seeking factual information -- such as currency conversions or weather forecasts -- as opposed to links to other companies.

“In reality, Google Search sends billions of clicks to websites every day, and we’ve sent more traffic to the open web every year since Google was first created,” Danny Sullivan, public liaison for search, wrote in a post on the company's corporate blog. “And beyond just traffic, we also connect people with businesses in a wide variety of ways through Search, such as enabling a phone call to a business.”

The spokesperson adds: “Ohioans simply don't want the government to run Google like a gas or electric company. This lawsuit has no basis in fact or law and we'll defend ourselves against it in court.”

Yost is not the only one to criticize Google over its search results.

A 2015 study funded by Yelp concluded that Google potentially “degrades” its search results, to the detriment of users.

“Our findings suggest that Google is -- in some instances -- actually making its overall product worse for users in order to provide favorable treatment to Google content,” that paper stated.

In 2013, the Federal Trade Commission closed an investigation into Google without finding that the company had violated antitrust laws by promoting its own services in its search results.

Former Chairman Jon Leibowitz said at the time that Google's primary reason for touting its own offerings in the search results was "to improve the user experience," as opposed to harming potential competitors.

"While Google’s prominent display of its own vertical search results on its search results page had the effect in some cases of pushing other results 'below the fold,' the evidence suggests that Google’s primary goal in introducing this content was to quickly answer, and better satisfy, its users’ search queries by providing directly relevant information," the FTC added in a written statement about Google's search practices.

Goldman adds that Google -- like other newspapers and other web publishers -- has a constitutional right to exercise editorial control over the material it displays online.

“The imposition of common-carrier delegation would conflict with the First Amendment,” he says.

Judges have previously held that Google has a free speech right to decide what material to display in its search results.

For instance, in 2017 a federal judge in Florida dismissed a lawsuit against Google by e-ventures Worldwide, which claimed its sites were wrongly removed from search results.

"Google’s actions in formulating rankings for its search engine and in determining whether certain websites are contrary to Google’s guidelines and thereby subject to removal are the same as decisions by a newspaper editor regarding which content to publish, which article belongs on the front page, and which article is unworthy of publication," U.S. District Court Judge Paul Magnuson in the Middle District of Florida wrote in the matter. "The First Amendment protects these decisions, whether they are fair or unfair, or motivated by profit or altruism."