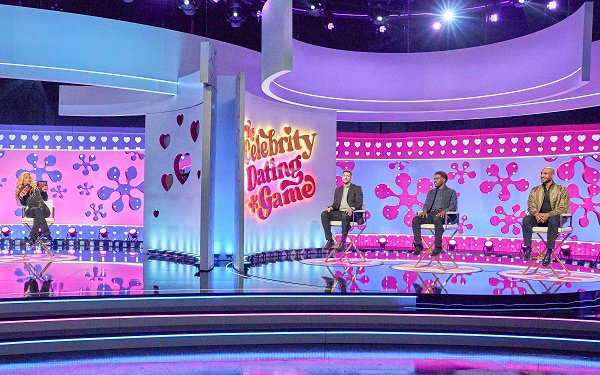 ABC’s new “Celebrity Dating Game” is the kind of TV-show idea you think of when you’re drunk.

But for most of us, the “great” ideas we conceive when under the influence -- book ideas with surefire titles, sitcoms based on our own lives, TV dramas and movies about new kinds of superheroes and the like -- come to seem a lot less brilliant, if not completely unworkable, on the morning after.

But not, apparently, for the masterminds behind “The Celebrity Dating Game,” which premieres Monday night on ABC.

At some point between that first and second bottle of wine, someone hatched the idea to revive “The Dating Game,” but with celebrities involved somehow. Oh, and we’ll get Zooey Deschanel and Michael Bolton to co-host it because, with those two on board, how can we lose?

Incredibly, this idea not only made it past the sober morning after of this wine bacchanalia, but it has actually made it all the way to ABC’s summer schedule.

Yes, they went ahead and made the show anyway. What they produced is an hour-long show in which “celebrities” (to apply the term as loosely as possible) are the unidentified and unseen objects of dating desire for three non-celebrity men or women.

As the above photo shows, the “Celebrity Dating Game” set is inspired by the famously mod set of the 1960s original (which did not dabble in celebrities).

The celebrity in the photo (far left) who is making herself available for an unknown date with one of three total strangers is Iggy Azalea, although she is not in the premiere episode the TV Blog previewed this week.

With two segments running a half-hour each, the celebrities seeking dates in Episode 1 were Hannah Brown and Nicole Byers.

Brown was a beauty pageant contestant and then the titular star of one of the seasons of “The Bachelorette.” She later competed on “Dancing With the Stars,” which she won.

Both of those shows were on ABC, which means booking her for this summer dating game show must have been the easiest day’s work in 10 years for the producer assigned to find contestants for this show.

Nicole Byer was described on the show as an author, comedienne and actress. The fact that I have never heard of her should not cause her to lose a minute of sleep.

And so, the stage was set. In the two segments I watched, the celebrities asked questions of their unseen paramours and often got surprising answers -- both good and bad.

The worst was an answer Byers got from one of the contestants when she asked him to describe what true love felt like, and he said it was similar to the way he feels after going to the bathroom. You can’t make this stuff up.

In the end, both celebrities made their choices, but a question still hung in the air -- namely, where or when would these “dates” take place? If memory serves, the announcer’s description of the amazing date or trip that the couples would go on was one of the highlights of the old “Dating Game.”

Here, however, nothing at all is said about the actual date, which leads one to believe there will never be one. So much for Byers’ search for the meaning of true love.

As for Deschanel and Bolton, she does most of the heavy lifting while he sits nearby and is seen occasionally in quick reaction shots in which he appears to be having almost no reaction at all.

However, though he appears relatively listless most of the time, he rises from his seat at least once in every segment to deliver a specially written song that is intended to give the three non-celebrities clues about the unknown celebrity they are trying to date.

These Michael Bolton song interludes, silly as they are, emerge as the highlights of the show. Someone must have thought of them while they were sober.

television
2 comments about "A Toast To A New Show That Only A TV Executive Could Think Up".
Check to receive email when comments are posted.
Read more comments >
Next story loading