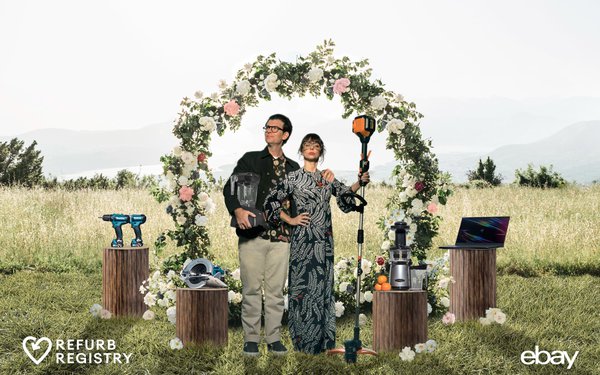 Many couples, still shaking off lockdown, say they're surprised they're still together -- a sentiment eBay thinks is worth honoring. So it's launched the Refurb Registry, a tongue-in-cheek toast to surviving many long months of unprecedented togetherness.

The site is like a bridal registry, except a) it sells only certified refurbished items, and b) it traffics in depressingly utilitarian categories. Does anything say matrimonial meh like a weed whacker or noise-canceling headphones?

Using a video starring comedic couple Natasha Legerro and Moshe Kasher, eBay focuses on just how exhausting all that togetherness was for some couples. The two starred in their own "The Honeymoon Tour," which became a Netflix special called “The Honeymoon Stand-Up Special.”

The registry guides users through a quick set-up, letting them describe their shared lockdown experience with phrases like "All maxed out on quality time," "Even the WiFi struggled," "Get a pet, they said" and "Our house shrunk."

From there, the registry generates a list of gift suggestions, including refurbished Roombas, gaming computers and power drills. Users can either share the registry with friends and family who might be inclined to give them a gift just for making it through the pandemic without a break-up, or enter to win a $5,000 eBay gift card.

The San Jose, California-based eBay launched its "Certified Refurbished" line back in October. Including brands like Dirt Devil, Hoover, Makita, Philips, and Razer, the line's products are priced up to 50% lower than their new versions.

The company backs refurbished items with a two-year warranty.

In its most recent quarterly report, eBay says it introduced Certified  Refurbished  to keep up with surging demand for both sustainability and value. It's extended the platform to include some 150 brands, and expanded it to the U.K., Canada and Germany.