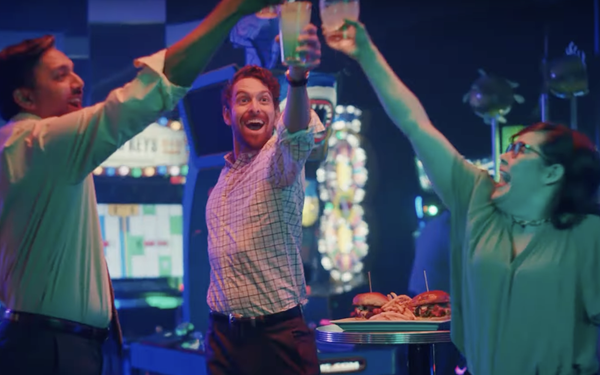 First you lose your customers, and then most of them come back—but not all of your employees do.

That’s why Dave & Buster’s Entertainment is allocating $5 million for hiring programs and employee-retention incentives so the fast-casual restaurant chain can optimize the busy summer months of June and July.

The labor shortage comes as Dave & Buster’s—which combines food and beverages with games and TV viewing—ramps up marketing with no fewer than seven new commercials in the past week.

The spots promote a “Ding Ding Ding” summer campaign that spotlights 23 new items on a menu that has been reduced by 33% since the pandemic outbreak, and the addition of seven games.

Prior to the campaign, Dave & Buster’s ran this two-minute video touting the benefits of working at the 141-unit chain known for its “Eat Drink Play and Watch” motto.

“The labor market that we are facing today is the most challenging one that I have seen in my career,” COO Margo Manning—who has spent just shy of 20 years at Dave & Buster’s—told financial analysts last week on a Q1 earnings call.

The chain is leaning on more technology advances to offset the labor shortage.

It’s using tablets and other forms of contactless ordering and payment in more than 50% of its locations. In one restaurant in Dallas and one in Manhattan’s Times Square, diners can order by phone in a test that’s yielded positive results.

“If the guest is uncomfortable and is looking for the server experience, we can adapt,” said Manning.

“But what's been interesting is in both of these situations we've had high guest adoption and it's been really pretty well received. So we're encouraged by that.”

“The new, modern approach to media will be accompanied by unique activations ranging from bank card partnerships to TikTok influencers,” CEO Brian Jenkins said on the May 2 conference call.

Place-based data provider Placer.ai looked at monthly, pre-pandemic visits to Dave & Buster’s in January of 2019 and found that visits were 42% lower in January of 2021. That improved to a drop of just 4% last month compared to May of 2019.

According to a May survey of 378 U.S. adults by Feedback Loop, 47% of male respondents preferred to dine only outdoors compared to 37% of female respondents.

The survey also found that lower-income households are more likely to dine indoors—with 38% of respondents with household income under $75,000 preferring an outdoor table, compared to 54% of those with more than $75,000.