Penny-Pinchers On Parade In TLC's 'So Freakin' Cheap' 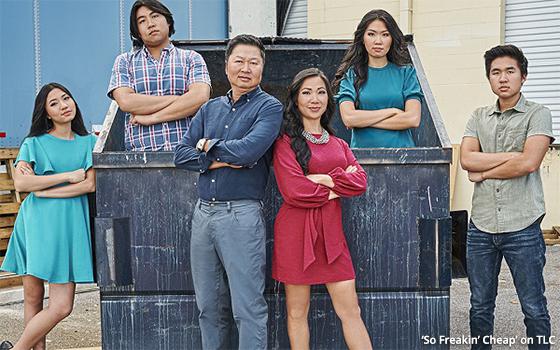 TV’s subcategory of documentary-style reality shows about real people with various addictions and obsessions is a little like the car accidents on the other side of the highway that we tell ourselves not to look at, but cannot resist looking at anyway.

The newest entry in this peculiar group of TV shows is, not surprisingly, on TLC, which has honed a reputation over the years as a showcase of unusual people and unusual behaviors (although it is far from the only channel on TV that occupies this space).

Premiering next Monday night, this new TLC show is called “So Freakin’ Cheap,” and it is about the lengths some people will go to save not only a buck or two, but also dimes and pennies.

You might even place this show in a sub-subcategory of reality shows about people who are obsessed with saving money, although there is really only one other show that comes to mind in this narrow niche -- the TLC series called “Extreme Couponing.”

That show was about people who hoarded grocery store coupons and then redeemed them all at once in epic purchases of ketchup, frozen waffles or 400 cans of Campbell’s soup.

By contrast, the people seen in “So Freakin’ Cheap” are such penny-pinchers that at least some of them try to avoid paying store prices altogether by haggling with retailers, scavenging in dumpsters or taking on do-it-yourself projects to avoid paying professionals.

Dumpster-diving Rosanna Tran, 52, of Orlando (seen with her family positioned in and around a dumpster in the photo above) calls herself the “Queen of Frugalness,” and proudly describes her family as “crazy cheap Asians.”

“Dumpster diving is a lifestyle,” she says enthusiastically at one point in the one-hour premiere episode of “So Freakin’ Cheap.”

Elsewhere in the episode, one woman is so cheap that she has budgeted $750 to pay for her daughter’s wedding (much to her daughter’s embarrassment and chagrin), which includes shopping in pawn shops for a wedding dress.

Still another woman seen on the show is obsessed with remodeling her home herself. In the first episode of “So Freakin’ Cheap,” she sets her sights on demolishing a wall in her home that everyone is telling her is load-bearing. But she refuses to believe them when they warn her that she might bring the whole house down.

She is so cheap that she balks at paying $20 for a sledgehammer in a hardware store to do the job. Instead, she is seen fashioning her own sledgehammer out of a brick that she manages to tie onto the end of what looks like an old axe handle.

At no time in the show are any of the families revealed to be indigent, impoverished or suffering particularly from an acute money shortage. Instead, by all appearances they seem squarely positioned in the American middle class.

So if they are not desperately poor, then why are they diving in dumpsters and reusing paper plates (as one family does in the show)?

Satisfactory explanations for this behavior are in short supply in the series premiere, other than the fact that the female heads of the three households seen on the show are hellbent on pursuing this “lifestyle,” and there is little any of their family members can do about it.

In coming attractions seen in the premiere, we do get hints that the penny-pinching obsessions of these wives and mothers are, in fact, causing serious rifts in their families with spouses and children.

Watching these families live the cheap life is at first fascinating, but eventually it comes to seem pathetic. It reminded me of TV’s other obsessional reality shows -- most notably A&E’s “Hoarders” and TLC’s copycat show “Hoarders: Buried Alive” -- that are more depressing than they are entertaining.