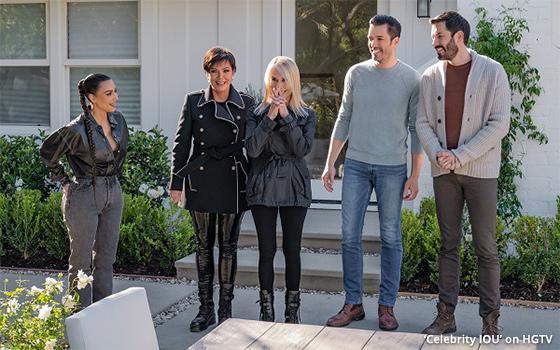 Intellectual property rights are apparently not sacred in the TV business, where the copycatting of shows already on the air has been something of a tradition (and a dubious one) practically since the medium began.

But it has been a very long time since I have come across an example as blatant as the one that is taking shape this summer.

Suddenly, on two channels, celebrities are getting their hands dirty taking up renovations on behalf of non-celebrities to whom the famous folk feel they owe a debt of gratitude.

Of the two networks, HGTV clearly got there first more than a year ago with the Drew and Jonathan Scott series called “Celebrity IOU.” And now, CBS has -- ahem -- “borrowed” the idea for a new summer series premiering July 9 called “Secret Celebrity Renovation.”

On both shows, celebrities agree to undertake and participate in a renovation project that will hopefully warm the heart of someone important to them.

For example, on one episode of “Celebrity IOU,” actor Rainn Wilson helped update and renovate a home belonging to his son’s former nanny -- a woman who not only benefited Wilson’s son and helped in his upbringing, but who became a close friend of the family.

More recently, on the recent season premiere of “Celebrity IOU,” Kim Kardashian and mom Kris Jenner pitched in with the Scott twins (aka HGTV’s the Property Brothers) to create a backyard oasis for an old family friend.

" 'Celebrity IOU’ is a blockbuster HGTV series where Hollywood A-listers express their deep gratitude to the individuals who have had a major impact on their lives by surprising them with big, heartwarming home renovations that bring everyone to tears," reads a description of "Celebrity IOU" in some of HGTV’s publicity material for the show.

Well, if near-plagiarism is the sincerest form of flattery, then HGTV will find the following p.r. verbiage from CBS for the new “Secret Celebrity Renovation” to be flattering indeed.

" 'Secret Celebrity Renovation' provides stars with a hands-on opportunity to show their gratitude to someone who has had a significant impact on their life’s journey by helping to realize the renovation of their dreams," says this boilerplate passage from a CBS press release for this summer renovation series.

Not only was HGTV there first with this concept, but some might argue that CBS -- or any such entertainment network -- really has no business in the home-renovation space anyway (although CBS is far from the first broadcast network to dabble in these kinds of shows).

In many other walks of life such as publishing and academia, to name two examples, plagiarism is considered a serious offense. Publicity around this issue has almost always reflected negatively on the plagiarism perpetrator, and has had consequences for his or her future in their professions.

But not in the TV business, where "borrowing" someone else’s idea and profiting from it is a time-honored tradition, and only once in a while does anyone sue or otherwise raise an eyebrow.