Marveling At Marv Albert As He Nears Retirement 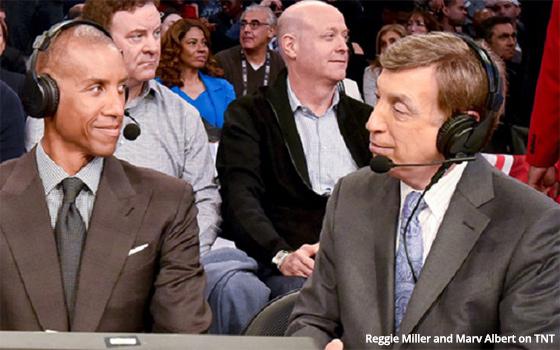 The Cinderella performance of the Atlanta Hawks in the current Eastern Conference Finals has not only kept their own hopes alive in the grueling NBA playoffs, but has also staved off Marv Albert’s pending retirement.

The Hawks’ series against the Milwaukee Bucks -- now tied at two games apiece going into Thursday night’s Game 5 in Milwaukee -- is Albert’s last stand. He announced in May that the then-upcoming Eastern Conference Finals would be his final broadcast.

His retirement begins when these Eastern Conference Finals end.

At the moment, they are guaranteed to go at least six games, which means that Game Six (Saturday in Atlanta) or Game Seven (Monday in Milwaukee, if necessary) will be Albert’s last.

Until then, we get to savor his final games and marvel at the tenacity and longevity of this consummate broadcaster.

He is 80, but you would never know it from the still-vibrant tone of his voice -- a voice unique in the annals of broadcasting today -- and his enthusiasm for NBA playoff basketball representing the pinnacle of this incredible televised sport.

Paired with Reggie Miller doing the color commentary, Albert is demonstrating how much he will be missed after he fades into private life in just a few days.

Broadcasting skills such as those possessed by Marv Albert represent a dying art in today’s anything-goes media world.

Every time a broadcaster of his generation hangs up his microphone, we lose another link to a time when talking on the TV or radio was not a job given to just anyone, but to those who saw it as a craft (if not an art) that was taught, practiced and continually honed and maintained.

Listening to Marv Albert call basketball games has long been something special, but when his skill and experience is matched with the kind of winner-take-all series now being played by the Bucks and Hawks, it is magic.

As many might agree who have tried in vain to find anything to watch on TV here in the traditionally fallow month of June, the NBA playoffs have emerged night after night as the best thing on, by far.

This is especially true of TNT -- whose telecasts include the incomparable pregame, halftime and postgame commentary and analysis of Shaquille O’Neal, Charles Barkley, Kenny Smith and Ernie Johnson. They are quite possibly the most entertaining foursome to be found on TV anywhere.

After the Hawks and Bucks play to a conclusion -- with the winner going to the NBA Finals against the Western Conference-winning Phoenix Suns -- we who love the NBA playoffs will still have a final seven games to enjoy.

But those games will revert to ABC, which means TNT and its broadcasters will be done until next season -- except for Marv Albert.

broadcasting, sports, television
1 comment about "Marveling At Marv Albert As He Nears Retirement".
Check to receive email when comments are posted.
Next story loading