'Animal Kingdom's' Sons Of Anarchy Carry On Without Mom 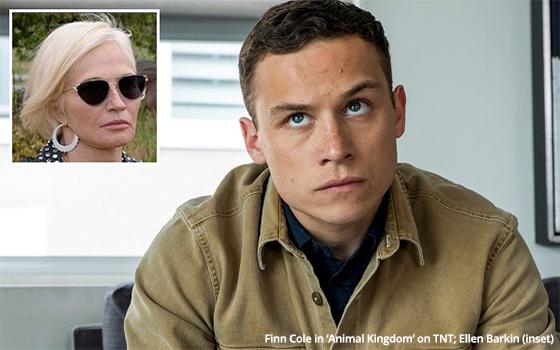 The long lag time between seasons that afflicts some TV series is a relative rarity in the TV business.

“The Sopranos” was something of a pioneer in this area. Fans of the show can well remember the production delays that beset this series -- most notably, if memory serves, a prolonged contract renegotiation with series star James Gandolfini.

The delays resulted in extraordinary time gaps between seasons. One such gap stretched to two full years between the end of Season Five in March 2004 and the start of Season Six in March 2006.

The delays stirred up strong emotions among the “Sopranos” faithful because they felt they had a lot invested in the show’s characters and storylines.

But “The Sopranos” was an extraordinary TV show. Not nearly as extraordinary (though reasonably high up on the TV-drama quality scale) is TNT’s “Animal Kingdom,” which is returning this weekend for a new season -- its fifth -- after an absence of almost two years (about 23 months).

This delay was likely due in large part  to the inconvenience posed by the COVID pandemic and its shutdowns which halted production.

The question is, was the “Animal Kingdom” audience avid enough two years ago to reassemble now, almost two years after the end of Season Four? Or has their interest waned, along with their strong memories of what the show was all about in the first place?

One thing is for sure: When Season Four concluded in 2019, it ended with a bang -- namely, the violent (and to the show’s fans, surprise) death of the show’s lead character, the crime-family matriarch played by Ellen Barkin (above photo, inset, with Finn Cole).

She was the star of the show, and her character, Janine Cody (called “Smurf” by her violent, grown sons), was the glue that held this highly unusual family together.

When the character was killed off, many fans were displeased. Barkin herself posted a Tweet whose wording was cryptic, but that many interpreted as her own displeasure at having had her character killed.

“Next episode Smurf’s will is opened,” Barkin wrote. “She left her boys a hit tv show.”

The Tweet was correct in one way. Smurf’s will is opened in the premiere episode of Season Five this Sunday, although its implications are not explored in the episode (it undoubtedly will be sometime later).

And while Barkin is no longer on the show, the consequences of Smurf’s death and the last caper she planned and carried out with her sons form the basis for Season Five.

Even though the previous season ended two years ago, the new season picks up right where the last one left off. Smurf was killed just after the family stole a million dollars in gold objects from a clan of doomsday preppers, some of whom were also distant relatives.

As Season Five gets underway, the preppers aim to avenge the death of their patriarch, who Smurf fatally shot, and to recover their gold.

With so much at stake, violence ensues -- which anyone who knows this show could have easily predicted. “Animal Kingdom” is one of those TV shows whose high-velocity gun battles waged with vast arsenals of high-powered weapons (which are nothing if not exceedingly loud) draw only a tepid response from local law enforcement (if they respond at all).

Another show that shared this characteristic was the FX series “Sons of Anarchy,” on which all sorts of public, daytime shoot-outs would occur, and no police would ever even show up in the aftermath.

On the other hand, if plausibility is in somewhat short supply in some aspects of “Animal Kingdom,” the show makes up for it in action and intensity.

Misdirected as their efforts might be, they are men of action, and this is one high-octane action show.

The fifth season of “Animal Kingdom” starts on Sunday (July 11) at 9 p.m. Eastern on TNT.