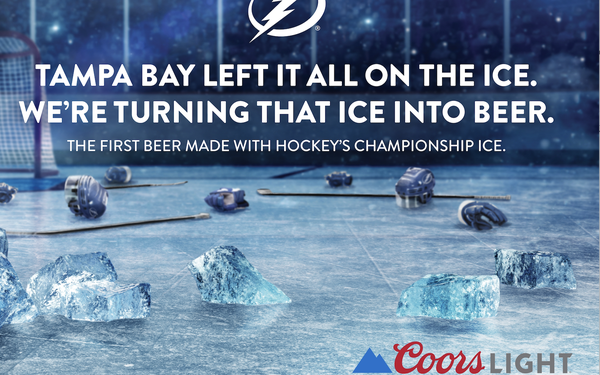 At the end of a Stanley Cup playoff game last month, New York Islanders fans inexplicably put their own players in danger by throwing beer cans onto the ice after a home victory over the Tampa Bay Lightning.

So thank goodness the Lightning, crowned Stanley Cup champions last Wednesday, have found a better way to mix beer and their home ice: with limited-edition Coors Light Champions Ice, beer brewed with the actual ice upon which the final game was played.

Coors Light said it scraped and collected ice from the Tampa Bay rink and had it transported to Golden, Colorado in stainless steel, vacuum-insulated containers “so while it might have melted down slightly, we definitely maintained the integrity of the ice/water.”

Once in Golden, the ice was purified and filtered, using reverse osmosis membrane ultra-filtration technology, and then blended into the Coors Light brew.

The brand won’t say how much ice was scraped, or how many 32-ounce cans have now been shipped to the 15 Tampa bars where local fans can get their hands on the collectables this week.

“As an official beer partner of the Tampa Bay Lightning, we’re proud to celebrate the team’s second-straight championship win by giving Bolts fans a literal taste of the action,” said Marcelo Pascoa, vice president of marketing, Coors Family of Brands, in the announcement.

A Coors Light spokesperson told Marketing Daily that the idea for Coors Light Champions Ice was Lightning-specific, and apparently done at lightning speed, being hatched only after the team had won game one of the finals.

Parent company Molson Coors, however, has partnerships with 14 of the NHL’s 31 teams, including the Montreal Canadiens, who were dispatched by the Lightning in the finals. In this case, though, the specific beer involved is Molson Export Ale.

Coors Light, however, was this season’s New York Islanders’ beer partner. That will change in 2021-2022 as the team with the beer-crazy fans recently signed with Heineken.