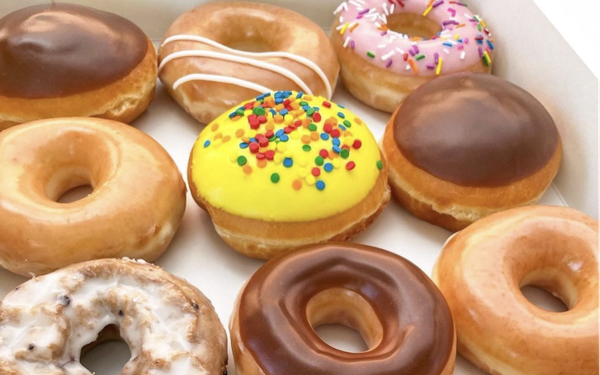 Doughnuts are in the news again this week, following Krispy Kreme's recent public offering. So far, the financial reviews are mixed, with some worrying about the company's growth potential and debt. But for now, it's got QSR Land thinking deeper thoughts about doughnuts.

Despite the durability of chains like Krispy Kreme and Dunkin', it must be said that among foodies, doughnut have gone in and out of style so frequently that they're always hot somewhere. They're like edible shoulder pads or gaucho pants.

But while other sweet treats seem to be on the downswing, like cupcakes, red velvet cake and the hot-for-a-season cronut, it seems nothing can keep a good doughnut down.

"Doughnuts are a perennial favorite menu item that has versatility in flavor, format and occasion," says Amanda Topper, associate director of foodservice for Mintel. "Despite pandemic-related restaurant shutdowns and streamlined menus, doughnuts continue to grow on U.S. menus."

She tells QSR Land that menu mentions of doughnuts have grown by 22% in the last three years, as tracked by Mintel Menu Insights.

It's at least a little due to the Instagram effect. "Doughnuts are taking on new formats, including being stuffed and topped for added social media appeal," she says. Some notable examples: Broad Street Dough Co. offers doughnut stuffed with cookie dough or topped with PB&J. Fluffy's Hand Cut Donuts has a donut sundae with soft serve, fudge and sprinkles.

Their appeal also probably hinges on never-ending variety.  Dunkin' and Krispy Kreme have long mastered a seasonal doughnut strategy, while smaller players -- including Duck Donuts, with its peach-pie and picnic donut offerings -- are also in the game. Regionalism is key, too: Dunkin' just introduced a limited-edition Red Sox-themed donut called the Fenway Faithful.

Topper says these ever-more-inventive strategies aren't likely to go away soon. "The upheaval of 2020 has increased consumers' desire to find fun, relief and indulgence in their food," Topper tells QSR Land in an email. "Restaurants have answered the call with comforting, delicious and engaging dishes, including donuts, that put updated spins on childhood favorites to create something modern yet nostalgic."

Urban Donut, for instance, features an "I Want S'more" Donut dipped in chocolate and topped with toasted marshmallows and Teddy Grahams.

For example, Los Angeles' Hinoki & The Bird offers a miso doughnut with honey caramel, while Brooklyn's Fan-Fan Doughnuts offers a Mexican guava and cheese variety. And, she says, "Japanese milk bread doughnut are one area to watch."