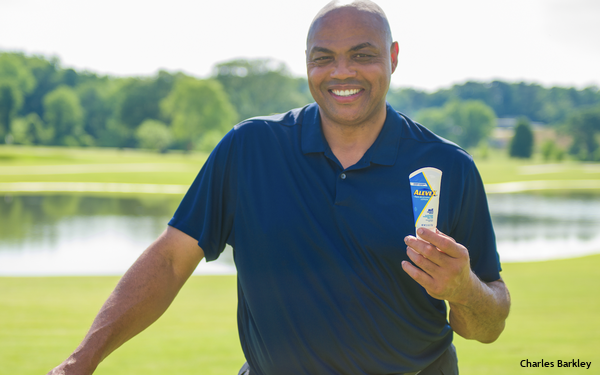 Entering the world of Bengay, Vicks VapoRub and Tiger Balm, Bayer has launched a topical pain relief line, AleveX, containing menthol and camphor -- but not the naproxen found in its Aleve pills.

To support the launch through Aug. 18, Bayer is searching for “The Worst Golf Swing in America.” Well, not really, since the promotion under that title is a sweepstakes, not a contest. But who better to judge such fails than former NBA star Charles Barkley, a butt of ribbing for his bad swing, and pro golfer Max Homa, renowned Twitter roaster of celebrity swings?

To help promote the sweepstakes, Aleve also plans tie-ins with Sports Illustrated and YouTube (including a masthead takeover and auction).

Lippe Taylor Group’s twelvenote, which had been ShopPR until earlier this month, is the creative, earned, social and sweepstakes agency.

The grand prize winner will receive a video chat with Barkley and Homa, along with a set of golf balls autographed by the duo.

To enter the sweepstakes, consumers submit videos of their golf swings on Instagram, Facebook or Twitter, using hashtags #SwingIntoAleveX and #Sweepstakes. An unidentified number of the videos will be commented upon by Barkley and Homa as runner-up prizes.

“I'm excited to see the swings people submit,” said Barkley in a press release. “Especially now that I've improved mine a bit, someone's got to be worse than me!”

Explaining the golf tie-in, Aleve senior brand director Lisa Perez, said, “We wanted to encourage consumers to get out and be active because AleveX will be there to help relieve their aches and pains, so they can keep going with their day.”

AleveX is available in lotion, spray or roll-on versions, with suggested retail prices ranging from $13.97 to $16.97.