OMD Is The Global Billings Leader For No-Growth 2020

Omnicom’s OMD remains the top media agency network by billings according to the latest COMvergence report.

The COMvergence global billings rankings report is based on 2020 media agency and group billings, including digital media spending.

None of the major agency networks / groups posted positive growth in 2020 per the report but OMD was ranked first worldwide for the second year in a row, with total 2020 billings estimated at $21.3 billion. That was down 9.7%.

Intra-big six group share means that the calculation is based on the total for the big six media agency groups — excluding independent agencies.

The average billings decline in 2020 among the 19 holding company-owned media agency networks is 10.5%, which was the same rate of decline for the big six media agency groups, with declines ranging from 6.1% for Havas Media Group to 15.4% for dentsu international.

For independent agencies, COMvergence evaluated the top 60 local media agencies, which combined represent total billings of $20 billion, or 10% of the total billings controlled by all agencies assessed globally.

Horizon Media ranked as the largest worldwide independent agency with total billings of $7.2 billion, or one third of total independent billings.

Other top independent agencies include Canvas, Haworth Marketing + Media, and Assembly/MDC Media Partners in the U.S.; Mediaplus in Germany/Switz/Austria; Madison Media in India; Crossmedia in Germany/U.S.; and Pilot Media in Germany.

Digital media billings represented 39% of the media agency networks’ total billings, up from 36% in 2019. 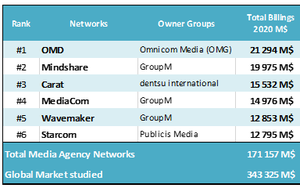