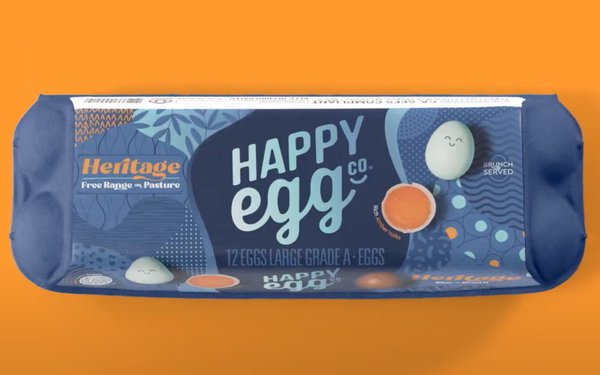 Premium-egg producer Happy Egg Co. is on a mission to change the dynamics of the egg category.

Convincing people that all eggs should not be considered the same is far from an easy task. But the market opportunity is broad, given a nearly 100% household penetration of eggs, according to Womack.

The 12-year-old Happy Egg is using its repackaging—with QR codes that unlock various consumer engagement opportunities—plus a “Crack Open Happy” brand platform to extol the virtues of its brown- and blue-shelled, free-range products.

In this interview, edited for brevity and clarity, Womack talks about consumer engagement opportunities—and why the dairy section of stores needs more innovation.

CPG FYI: How would you describe the egg category over the past, say, half century?

Womack: Eggs historically have been sold the exact same way and with very little consumer insight. It’s a category that’s been very production-minded the way it’s been marketed to people. Are the shells white or brown? What size are they?

There just is not a lot of category engagement, so people haven’t understood that it’s possible to bring a better and differentiated egg to market.

CPG FYI: So you think there’s an opportunity to shake up the category from a consumer-awareness standpoint?

Womack: There hasn’t been a lot of innovation, which you now see happening in milk and butter. For example, there’s a higher-end better butter being brought to market. We think it’s time for it to happen with eggs.

CPG FYI: That can’t be an easy message to communicate.

Womack: Not all all. It’s like telling people that there’s different kinds of air you could breathe.

I would say it’s not an easy message because not a lot of people have taken the time to understand how consumers actually think about eggs broadly. Not, how do we as a producer of eggs think about eggs.

CPG FYI: Given that almost half of all eggs sold are private-label, price would seem to be a major factor in consumer choice.

Womack: If you look at cost per gram, protein-wise eggs are hands down the cheapest protein you can get. So it’s a very high quality source of protein, but people just aren’t thinking about it that way. They’re just habitually going through the motions in the way they think about it and purchase it. If you’re going to make people think about an entire category differently, you really have to get their attention.

CPG FYI: What exactly are you doing with the on-package QR codes?

Womack: Right now it’s for consumer promotion. There are many areas of the grocery store that tend to have promotions. Salty snacks has it all the time. Beverages, of course. Those promotions almost become noise.

But you go back to the dairy category and there’s not a lot of excitement inside the store. There’s not a lot from a consumer engagement standpoint. We thought our package redesign was an opportunity to have people pay attention to the package as they haven’t before.

CPG FYI: What are some of the consumer experiences the QR codes unlock?

Womack: What if you could literally crack open a carton of eggs and a whole world spilled out onto your kitchen island? And what if you could make a digital version of an egg hunt and make it fun and exciting?

We wanted to develop a way to connect and engage with consumers that’s different. We will sell millions of cartons. So if you think of that as a piece of media or real estate, it’s a great way to engage. In the future, there will be other programming, whether it’s recipes, animated shows, who knows.

CPG FYI: What are the incentives to engage with the codes?

Womack: There’s merchandise and sweepstakes. Everybody will win stickers.

We try not to take ourselves too seriously. We sell a product that falls out of a chicken and we’re called Happy Egg—so you can’t be overly earnest. A lot of times the things that are happening in this category tend to be a little bit earnest. At the end of the day, it’s an egg, and they get used all the time. We think everybody at any moment in their day should have the opportunity to crack open happy.