Cesar Millan's Understanding Of Dogs Is Wondrous To Behold 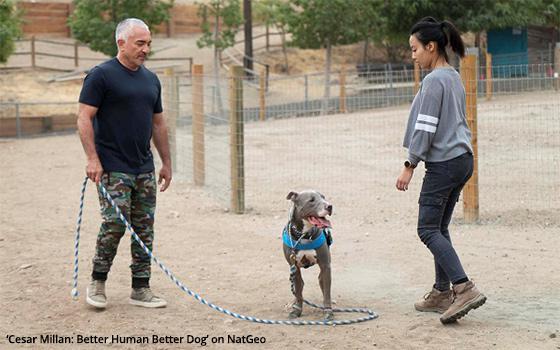 As anyone knows who has watched his TV shows over the years, Cesar Millan has an uncanny knack for understanding the lives and habits of dogs.

It is as if he has dog ESP. He is so finely tuned to the behavior of dogs -- as reflected in their body language and vocalizing (i.e., barking) -- that it sometimes seems as if he and only he has the temperament and skill set necessary to bring his unruly canine clients to heel.

This presents the famed dog trainer sometimes known as the Dog Whisperer with a challenge -- namely, how to train the human owners of misbehaving dogs to take the techniques he teaches them and put them into practice when they and their dogs are back home and Cesar is not there.

Episodes will become available to stream on Disney+ every Wednesday after they first air on the NatGeo channels.

The show explores the relationship between families and their dogs -- in effect, treating the humans and canines who reside under the same roof as “packs” with traits and hierarchies similar to dog-only packs.

Thus, Cesar’s goal in his interactions with the dogs and dog owners featured on the show is to improve the quality of life for both the humans and the animals that share the same household.

For Cesar, it is all about improving communication within the home, which is something many humans can benefit from learning about, and even more so when it comes to the world they share with their canine companions.

For many years, Millan, 51, has repeatedly used the word “energy” to describe the manner in which humans communicate with their dogs. He has apparently used the word so frequently that he is often asked to explain it.

That must be why he addresses the issue directly in the premiere episode of “Better Human Better Dog.”

“I want to explain 'energy'," he says, while facing a camera and talking directly and earnestly to his viewers. “I want everybody to understand the meaning of ‘energy’ once and for all.

“Our dogs are our avatar. They know how we feel, how we sound, how we move. At the moment we touch the leash, that energy travels right through the leash so our dogs respond based on our energy. So it’s super-important that we humans become conscious of how we feel.”

In the episode, he works with one couple to help them better understand their pit bull Goliath (pictured above) and another couple whose tiny dog -- a Yorkie-Maltese mix with a social media following -- snaps at its owner’s new husband, jeopardizing their nascent marriage.

Watching Cesar Millan work with these dogs is a magical experience. But here again, one wonders if these owners can replicate his techniques at home when he is no longer helping them. In the premiere episode of his new show, it appears that at least some progress has been made.

A great deal of the show takes place at a 45-acre facility Cesar owns called the Dog Psychology Center (DPC) in Santa Clarita, California. This place is as wondrous to behold as Millan himself as he continues in his life’s quest to bring humans and canines closer together.