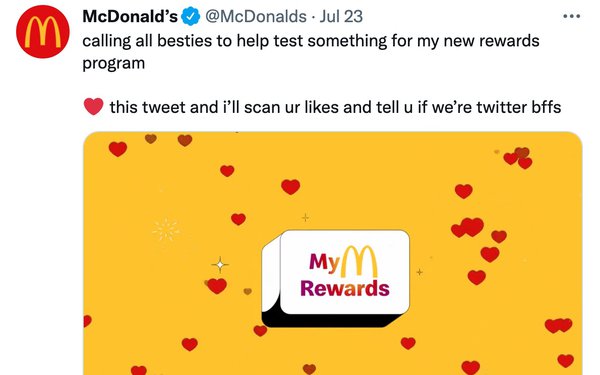 McDonald’s Corp. has launched a marketing campaign to promote its first-ever loyalty program as the QSR doubles down on digital experiences and sales rebound from the depths of the pandemic.

On Monday, McDonald’s announced the formation of a new customer experience team led by its first global chief customer officer, Manu Steijaert. Prior to his promotion, Steijaert was vice president, international operated markets.

“We need to create a more frictionless customer experience across all of our service channels,” president and CEO Chris Kempczinski said on a conference call with financial analysts today. “Our customers should be able to move seamlessly between the in-store, takeaway and delivery service channels so that we offer even more convenience and better personalization.”

MyMcDonald’s Rewards is available exclusively via the McDonald’s app. Diners earn 100 points for every dollar spent on qualifying purchases.

“To give you a sense of the growing digital connection we have to our customers, we have the most downloaded QSR app in the United States,” Kempczinski said on the earnings call.

“We already have over 22 million active MyMcDonald's users in the U.S., with over 12 million enrolled in our new loyalty program, MyMcDonald's Rewards.”

McDonald’s said it is leveraging “first-to-market” technology on Twitter that “calculates fans’ loyalty and serves it back up to them when they engage with our Tweet.”

“Today, about 70% of our dining rooms in the U.S. are open. By Labor Day, barring resurgences, it will be nearly 100%,” added Kempczinski.