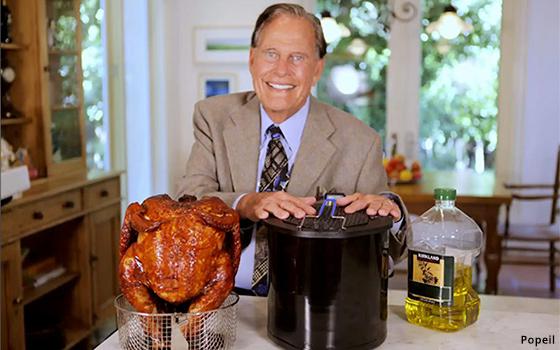 Ron Popeil, the legendary infomercial king, creator of the Showtime Rotisserie & BBQ and other products, and frequent target of spoofs, has died at age 86.

Popeil was rushed to Cedars-Sinai Medical Center and died there Wednesday morning, his family has announced.

Born in 1935, Popeil started his career as a pitchman on Chicago’s Maxwell Street, selling kitchen products on a small table, and later to packed audiences at Woolworth’s. In 1959, he created his first infomercial for the Chop-o-Matic.

His Rotisserie generated over $1 billion in domestic sales and shattered records on networks such as QVC.

Throughout the years, his company RONCO also sold products like Popeil’s Pocket Fisherman, Mr. Microphone, GLH Formula #9 (Hair in a Can), the Inside the Eggshell egg scrambler, and the Rhinestone Stud Setter (later called the Bedazzler).

Popeil was known for using the phrases, “But wait, there’s more,” “Set it and forget it” and “Less Shipping and Handling.”

In 1976, Popeil was portrayed by Dan Ackroyd in a "Saturday Night Live" lampoon.

Popeil was also a director of MGM Resorts International for more than three decades.

He is survived by his wife Robin, daughters Kathryn, Lauren, Contessa and Valentina, and grandchildren Rachel, Isabella, Nicole and Asher.
food, obituary, tv
Next story loading