Have More Than An Hour To Spare? Try Reading Some Platform Boilerplate 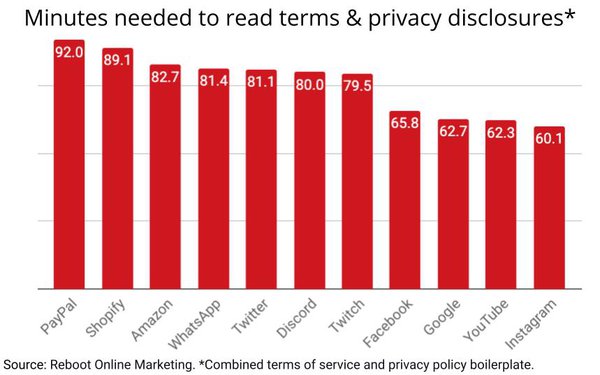 Twitter, a digital platform that original became popular because it limited the number of characters its users could use to communicate to 140 (eventually doubling that to 280), includes so many characters in its terms of service and privacy policy disclosures to users that it would take them an hour and 21 minutes to read.

That’s the finding of an analysis of report released this morning by Reboot Online Marketing delineating the number of words -- and the average amount of time that would be required to read them -- of the T&Cs and privacy statements of the major digital media platforms.

Interestingly, Twitter ranks only fifth among platforms in terms of its stultifying legal boilerplate, but is No. 1 among social media platforms.

The worst offenders are payment and/or commerce-based platforms, including PayPal (No. 1 at 92 minutes of reading time needed), Shopify (89.1 minutes), and Amazon (82.7 minutes), with peer-to-peer messaging platform WhatsApp ranking fourth (81.4 minutes).

Facebook’s Instagram lives up to the brevity of its images-dominant interface, with just about one hour needed to read its boilerplate, making it the least wordy of the major platforms analyzed. 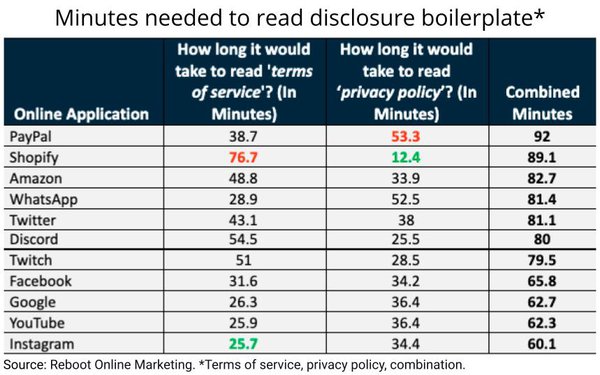