Lives Of Native-American Teens Are Hopelessly Sad In 'Reservation Dogs' 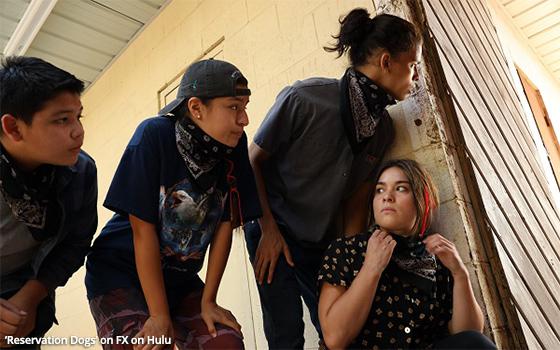 With its depiction of alienated youths living in a Native-American community in Oklahoma, the new half-hour series “Reservation Dogs” will be praised all over the place as some sort of cultural breakthrough.

And I suppose that on one level, that characterization is fair enough. It is the first scripted TV show of its kind to focus on this particular group -- namely, Native-American teens in contemporary America.

As such, the show -- premiering on Hulu on Monday (via the subcategory known as FX on Hulu) -- strives for an authenticity that most of us (including myself) are in no position to verify or judge.

Toward this goal, the show employs a cast composed almost entirely of Native-American actors. Some are known, such as Zahn McClarnon, who was seen recently in “Westworld,” “Barkskins” and “Longmire,” and Gary Farmer, whose performance in “Resident Alien” earlier this year was one of that show’s best features.

But the four characters at the center of the show are played by relative unknowns (pictured above, left to right): Lane Factor as “Cheese,” Paulina Alexis as “Willie Jack” (a name possibly inspired by “Billy Jack”), D’Pharaoh Woon-A-Tai as “Bear Smallhill” and Devery Jacobs as “Elora Danan.”

They are a group of friends whose boredom with life in their small Oklahoma town has them scheming to raise money to run away to California -- a destination that appears to have been chosen at random.

Unfortunately, their schemes are larcenous -- first vandalizing municipal infrastructure such as street lights for copper wire that they then sell to a local unsavory scrap dealer, and then graduating to stealing cars and then a delivery truck full of snack foods.

Throughout this antisocial behavior, they mope and complain about their dead-end lives. And yet, we are supposed to feel sympathetic to them. They are positioned in such a way that they are to be regarded by us as victims of history, society etc. (the usual suspects) instead of victimizers themselves.

To give the show its due, there does come a moment in Episode One when the four get a lesson in how one of their crimes -- the truck theft -- affected the life of the man who was responsible for this company-owned vehicle. He was fired and his wife left him, taking everything he owned.

The four even make a wan attempt to make amends for the truck theft, but they discover that it is too late. The truck has already been chopped up and sold for scrap or spare parts, leaving them feeling empty.

That emptiness is akin to the way I felt when watching this show. It is not easy to derive entertainment from the hopeless lives of others, but this, apparently, is what we are supposed to do with “Reservation Dogs,” to which I say: No thank you.