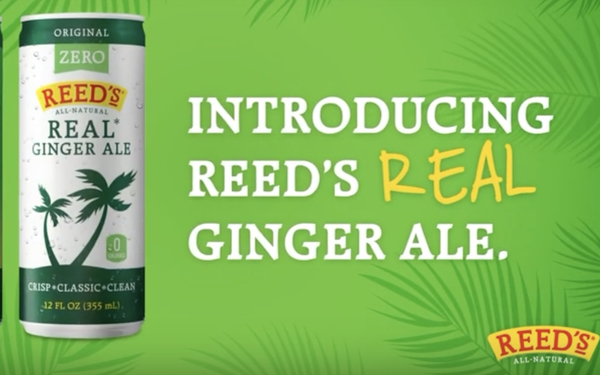 At a time when it seemed that only the biggest beverage brands could both launch new products and expand their retail distribution, Reed’s Inc. has managed to accomplish both over the past year.

Reed’s was early into the “real” ingredient space with its Reed’s and Virgil’s brands of ginger ale, ginger beer and other sodas—which contain no artificial colors, flavors or preservatives—mainly in the natural foods retail channel.

“It reflects 30 years of heritage where we’ve stayed true to who we are on the basis of real is better—and we’ve never deviated,” says Reed’s CEO Norman E. Snyder.

Snyder joined the company in September of 2019 as COO and was appointed CEO in March of 2020. His background includes stints at “new-age” beverage marketer Avitae USA, LLC and South Beach brand SoBe.

In this interview, edited for brevity and clarity, Snyder talks about breaking into convenience and drugstores amid the pandemic, the launch of non-alcoholic Mocktails and why Reed’s has decided to sit out the CBD-infused beverage craze—for the time being.

CPG FYI: How does Reed’s differentiate itself from the sea of beverages in the marketplace?

Snyder: Everything that we do we do with extra care. It’s like a family business. We keep our ear to the ground and listen to what consumers say.

CPG FYI: How exactly does that play out?

Snyder: Frequently, I’ll see a consumer communication, pick up the phone and call them—and they’re just flabbergasted that I did that.

We had a family that ordered some product on Amazon and, unfortunately, we didn’t have the can format at the time, so they got glass.

They called and said “We ordered it and a lot of the bottles were broken. We’re really disappointed, so what do we do?” I told our person who handles consumer communication to write them a note that they’re going to get a special delivery. I took cases out there and delivered it.

They were shocked. Their kid sent me this cute little video with a thank-you, but the parents wouldn’t let me leave.

CPG FYI: In May you launched your first 20-ounce, resealable bottles and gained entry to convenience and drug stores. How did that come about?

Snyder: To really spread our wings, it made sense to go that way. Both convenience and drugstores want to provide their consumers with healthier options. Talking to the buyers in convenience and drug stores, resealability is important. Their consumers want something they can put the top back on. We have a 16-ounce can but they weren’t really interested in that. So the price of entry was resealability and 20 ounces.

CPG FYI: Why did you just come out with ginger ale Mocktails?

Snyder: When we created our ginger ale, we did some flavors, but thought that was kind of me-too. At the same time, we’re looking at trends and a lot of folks want to have the option of a non-alcoholic version of a drink.

We used our ginger ale as a base, but took it up a notch so it’s not just a flavored ginger ale. They can be consumed straight without alcohol, or they can be used as a mixer. Again, we listened to our customers.

CPG FYI: Does Reed’s have plans to enter the CBD-infused beverage space?

Snyder: We made a CBD version before I arrived in 2019. We had some formulation issues, so we stopped making it and then fixed those issues. And there’s also the regulatory environment, which is is still kind of choppy.

One of the beautiful things about the United States of America is, we’re like 50 different countries when it comes to certain things. Every state was different, the laws were constantly changing, the federal government really hadn‘t set any standards to follow.

We thought when the regulatory environment provides a little bit more guidance as to what you can and can’t do—and things open up so brick-and-mortar places are going to take it—then let’s kind of get back into it.