Sick Of Staying At Home? Well, Your Home Has A Few Thoughts About You, Too 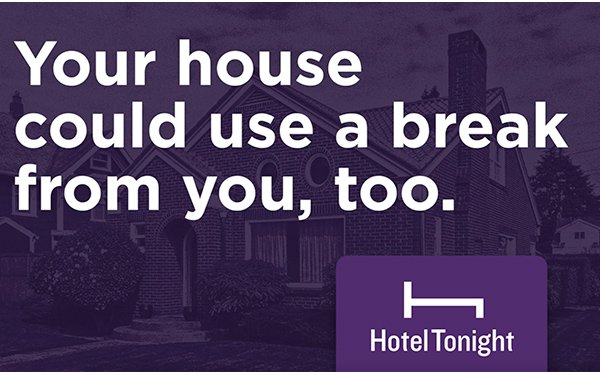 HotelTonight, a mobile hotel provider that offers last-minute hotel deals, has launched its first digital and social campaign as travelers are cautiously dipping their toes into the “leave the house for more than a few hours” pond.

The company is owned by Airbnb and its services are accessible via website and mobile app.

A set of three humorous online videos running on Facebook are the first work from barrettSF, which won the project in March.

If your house could talk, what would it say? “Your House Could Use a Break From You, Too,” the narrator comically responds in one ad. Given the 18 months we’ve all had, it needs space and don’t let the door hit you on the way out.

One home supports its owner being sans pants 24/7 but would prefer to see pants make a comeback.

In the final video, a home wants to test the “absence makes the heart grow fonder” proverb, challenging its owner to see if it’s true. By leaving.

For those of a certain age, the talking homes give off major Chairy vibes from “Pee-Wee’s Playhouse.”

“We were talking about how sick people have been of staying home this last year and then had a deep thought: If we're so tired of our houses, imagine how tired they are of us,” said Aryan Aminzadeh, creative director at barrettSF. “We're in our kitchens constantly, treating our dining tables like offices, and basically just never giving our homes some space. We decided it was about time they had a voice and encouraged people to head out the door for a quick getaway.”

The campaign is planned to run for twos to three months, but with the recent COVID-19 surge, the company is monitoring cases and may pull back the campaign in certain areas, if necessary.