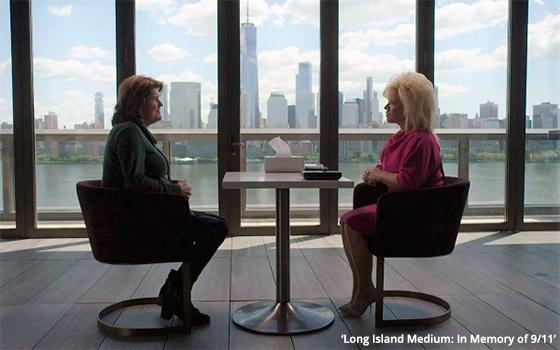 TLC’s "Long Island Medium," Theresa Caputo, is being accused of "exploiting" 9/11 with an upcoming special in which she will be seen contacting the spirits of 9/11 victims and passing on their messages to surviving relatives.

The exploitation accusations are reportedly being expressed on social media, but also in the headlines of stories posted earlier this month reporting on the social-media complaints and in the process, amplifying them and likely making them seem more numerous and more important than they really are.

Her one-hour special is titled "Long Island Medium: In Memory of 9/11." It is scheduled to air on TLC on Thursday, September 9, at 10 p.m. eastern -- two days before the 20th anniversary of the terrorist attacks on September 11, 2001.

In the show, Caputo will be seen meeting with relatives of victims of the attacks from three different locations representing the three targets of the attacks that day -- the site of the World Trade Center in lower Manhattan (seen apparently from a building across the Hudson River in Jersey City in the photo above), the Pentagon in Arlington, Virginia (also seen from a nearby building), and the site of the Flight 93 National Memorial in Stoystown, Pennsylvania.

At these locations, she “meets with families of the departed to deliver messages of healing and heroism from the spirits of their loved ones,” according to a press release last week from TLC. At around the same time, a three-minute promo video for the show appeared embedded in stories about it.

Almost as soon as the press release appeared on August 12 announcing this show, the “outrage” stories started to appear too.

Who was doing the shaming? According to the story, two people on Instagram who did not identify themselves.

"Once again exploiting these poor desperate family members lying to them into making them believe she can speak to the dead like COME ON PEOPLE! omgggg this makes me sick to my stomach," wrote one of them. From this thin gruel are today’s "outrage" stories concocted.

To be fair, other stories had similar social-media postings in which the critics were identified. And some detractors who possibly work as TV critics were also blasting the show, although it was doubtful they had yet seen it.

One such commentary was posted on TheWrap.com under the headline “TLC Just Set Cringey [sic] 9/11 Special With the Long Island Medium Doing Readings for Victims’ Families.”

What struck me most about this reaction piece was its first sentence: "With the 20th anniversary of the 9/11 terrorist attacks approaching next month, many networks will be airing what will hopefully be respectful and poignant specials of one [of] America’s darkest days. We doubt anyone would consider the one TLC has announced among these.”

The sentence’s expression of hope that the upcoming raft of 9/11 content that will flood the airwaves in the coming weeks will be “respectful and poignant” strikes me as naïve.

Maybe some of these commemorative TV shows will be everything this Wrap.com critic hopes they will be. But make no mistake: TV is by its nature an exploitive medium when it comes to the way it marks events such as the anniversary of a national tragedy.

The point of all of the 9/11 anniversary content coming our way soon is to draw eyeballs and drive ratings. Creating a better world is not the purpose of these programs.

It would seem that the only difference between many of the 9/11 documentaries and specials coming to our broadcast and basic-cable channels and TLC’s “Long Island Medium” special is the problem for some posed by the TLC show’s reliance on psychic phenomena to help a handful of survivors who, after all, agreed of their own volition to come on the show.

In addition, based on how Theresa Caputo has conducted herself on her show for 10 years, there is nothing to suggest that she or her 9/11 show will be in any way disrespectful to the show’s participants or its subject matter.

The detractors critiquing her and her show sight unseen are reacting as if she is some sort of storefront palm reader who seeks to separate her walk-in clients from their money.

It should go without saying, but she is not. And if her psychic powers help the people she does these sessions for -- no matter how far-fetched many of us think they are -- then who are we to complain?