Incredible Story Of How Cher Saved A Suffering Elephant 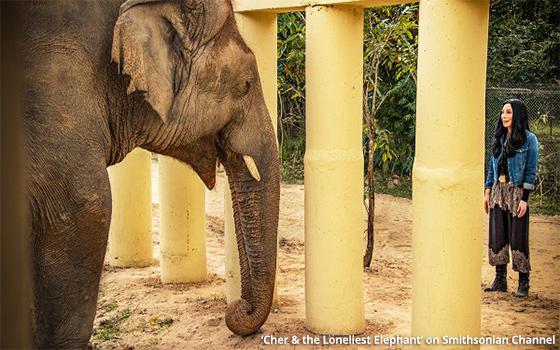 How many times have you spent a considerable amount of time grazing through TV channels and lists of TV shows for something to watch, but then not finding anything that suits your particular mood at the moment?

Recently, all we wanted to watch one evening was something uplifting, non-violent and non-stressful. And as anyone knows who watches TV regularly, finding something like that is akin to finding the proverbial needle in a haystack.

And yet on that evening, we got lucky when we stumbled upon a one-off documentary special we knew nothing about that was called “Cher & the Loneliest Elephant” -- a title that charmed us from the get-go because it sounded like the title of a children’s book.

This show, which ran for just under an hour, was available free, on-demand via the Smithsonian Channel. I understand that it is also available to Paramount+ subscribers (since Paramount+ owner ViacomCBS owns Smithsonian).

This show was just what the doctor ordered at that particular time. And it was as charming as its title led us to believe it would be.

It tells the story of a lonely male Asian elephant named Kavaan (estimated age roughly 30 years old, if memory serves) that had endured terribly cruel and neglectful treatment for years in a barbarous zoo in Pakistan that was like something out of the Middle Ages.

Somehow, perhaps due to the ubiquity of social media, videos and photos of the travails of this lonely elephant made it out of Pakistan and then circulated so widely on the internet that they even caught the attention of Cher (seen in the photo above coming face to face with her new elephant friend).

Basically, this pathetic creature was chained and virtually immobile for hours every day in a hot, dry dusty enclosure. Moreover, he had had no elephant company for years -- which the show explained is crucial for elephants because they are very social creatures.

The images of this elephant’s suffering not only attracted the attention of Cher, but of the whole world too.

In particular, the pictures drew condemnation from the world’s animal conservationists, zoo professionals and some legislators in Pakistan who eventually succeeded in having the entire zoo condemned and closed since all of the animals were suffering in similar ways.

But the zoo’s closing presented a huge challenge -- namely, how to transport this full-grown elephant thousands of miles from Pakistan to an elephant rescue facility in Cambodia where it could live out its days in relative freedom in the company of other rescued elephants.

The challenge was both logistical and financial. At some point in the process, along came Cher, who used her influence on social media (where she has around 4 million followers on Twitter) to spark worldwide interest in the project of moving this elephant to Cambodia.

She also mined her connections and contacts with people of means who apparently helped pay for the shipping of this very cumbersome and precious cargo -- by air -- from imprisonment in Pakistan to freedom in Cambodia.

“Cher & the Loneliest Elephant” is a fascinating documentary with a very colorful cast of characters (including Cher) that ends happily. What more can you ask for?