You Won't Learn Anything New From This College Comedy 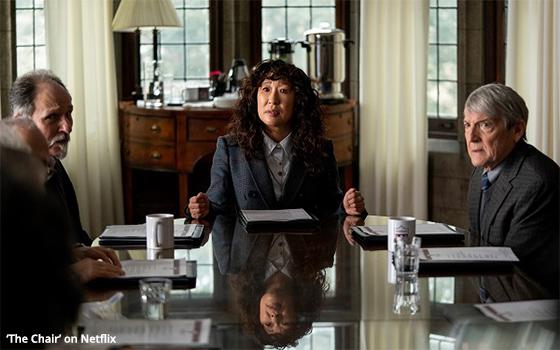 The perils and pitfalls of modern-day, woke culture on college campuses would seem to be the main subject up for examination in the new comedy premiering Friday on Netflix called “The Chair.”

But instead, the show veers frequently into an emphasis on ageism. And while it does not exactly condone the discrimination of older people (in this case, a group of aging, tenured professors), it does not precisely condemn it either.

In this way, the show is all over the place. Younger professors are shown to be more hip than the older ones and as a result, more relevant to their young “clientele” -- i.e., their students.

At the same time, however, one of the younger professors is making a hash of his life and in danger of losing his job -- tenure or no tenure.

On the other hand, his lectures are extremely popular, while his older colleagues continue to cover subjects no longer deemed relevant to the student body, which results in decreasing sign-ups for the older professors’ classes.

And now, the new head of the English department at fictional Pembroke College, Dr. Ji-Yoon Kim (played by Sandra Oh, pictured above), is being asked by the college’s president (David Morse) to navigate these ageist waters by warning the older English professors that their days are numbered unless they can revise their lesson plans in ways that will attract more registrants to their classes.

Dr. Kim is conflicted because these people who she is now pressuring to shape up are her long-time colleagues, and people she respects.

Can this new college English department head (“The Chair” of the show’s title) manage her new responsibilities and still stay true to herself? That appears to be the central question of this show.

And if that is the question, then the stakes seem low indeed. After all, this show is supposed to be a comedy, not a drama -- which means that its approach to the issues it presents are decidedly lighthearted.

The show is also mild and muddled. It seems to want to address the various issues afflicting college campuses today, but not hit them too hard, or take a clear stand on any of them either. Or to put it another way, although this is a show about college, do not expect to learn anything new here.

Having said all that, the show boasts a very strong cast that includes, in addition to the veterans Oh and Morse, Holland Taylor, Bob Balaban and Jay Duplass.

And with only six, 30-minute episodes, this untaxing comedy feels just right for a three-hour binge here in the dog days of August.

“The Chair” starts streaming on Friday (August 20) on Netflix.