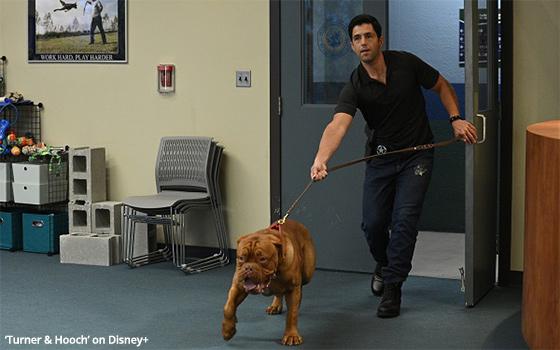 At last! A TV show that is pleasant to watch.

“Pleasant” might seem like a pretty low bar from which to start a favorable assessment of a television show.

But I am here to tell you that TV shows that are “pleasant” to watch -- i.e., not repellent, offensive or disgusting -- are rare to come across for a TV columnist in this day and age.

This pleasant show, which I would also venture to describe as “nice,” is “Turner & Hooch,” which premiered in July on Disney+.

It is adapted from the 1989 movie of the same name that starred Tom Hanks as a police detective (“Turner”) in a small California city who came into possession of a big, unruly oaf of a dog (“Hooch”) that he did not want.

In the TV show, a young, San Francisco-based federal marshal named Turner comes to own a dog of the same breed and temperament -- a French mastiff (also known by the French name dogue de Bordeaux).

In the first episode of the new series, we learned that this big, lumbering, slobbering dog is a surprise bequest from Turner’s father, a retired police detective who recently died.

As the Disney+ publicity materials for the show make clear, we are to assume that this Turner’s dad is the Turner Sr. character played by Tom Hanks in the old movie. However, it is doubtful we will ever see Tom Hanks on the TV show since his character is deceased.

The new Turner is played amiably by Josh Peck, seen in the photo above with one of the five French mastiffs that are being used to play the one dog character, Hooch.

The show opens with Turner and a U.S. Marshal Service partner (played by Carra Peterson) being assigned to safeguard a government witness who is poised to testify against a dangerous gang of bank robbers.

Through various twists and turns, the newly acquired Hooch turns out to be a heck of an asset for the U.S. marshals as the dog ends up playing a key role in the eventual resolution of the case.

Through it all, many shots are fired in a series of harmless gun battles in which nobody gets hurt. There is no blood and no profanity. In this show, the distinction between the good guys and the bad ones is crystal clear. Here, there are only heroes -- no anti-heroes.

The reason this show came as a relief (and merits adjectives such as “pleasant,” “nice” and “amiable”) was because a day earlier -- last Thursday -- I had spent time watching one episode and part of a second one of a new series that was scheduled to premiere Sunday night (July 18) on Showtime.

Titled “The End,” this Australian import was described by Showtime as a dark comedy, a designation that often translates into “not a comedy at all.”

Among the themes and subjects this “comedy” took up were death, suicide, terminal illness, aging and dementia.

Episode One opened with a full-frontal vomiting scene, and Episode Two started with another bodily function that I won’t even go into.

By the time I bailed on this show about seven minutes into Episode Two, I was so put off and discouraged about the state of television that I almost retired right then and there.

“Turner & Hooch” is just what I needed -- a non-taxing TV show about a well-meaning man and his big lovable doofus of a dog. A show like that beats a comedy about death every time.

This column was previously published in Television News Daily on July 19, 2021.