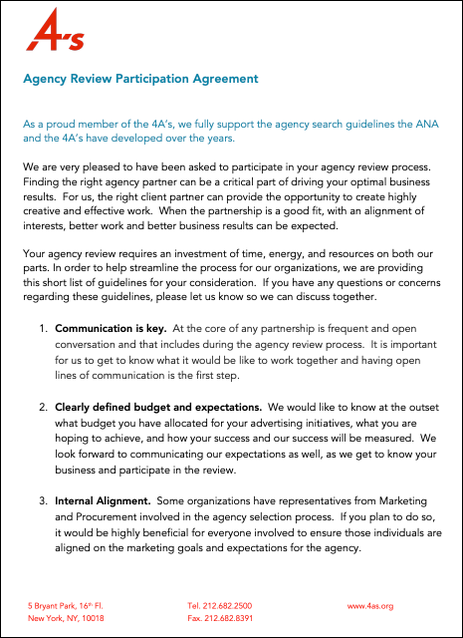 The American Association of Advertising Agencies (4A’s) has unveiled what it’s calling an “Agency Review Participation Agreement” it says is designed to address “a number of agency pain points when participating in a pitch being conducted directly by a marketer.”

The implication is that reviews managed by a search consultant are more organized and run more smoothly than those conducted directly by clients.

The “agreement” is not legally binding, but does spell out agency expectations going into a review. It’s a complement to review guidelines the 4A’s has previously developed.

For example, it calls for “frequent and open conversation” throughout the process and hopefully throughout any subsequent relationship.

It also indicates that a participating agency wants to know about the client’s ad budget going into a review and benchmarks for success both for the marketer and agency.

The agreement addresses several contentious issues, including payment terms and speculative work. Some marketers have made headlines by demanding lengthy periods — four months or longer — to pay for services rendered. The agreement stresses that agencies want to be paid no later than 60 days after invoices have been issued.

It’s no secret that in some past reviews, clients have demanded ownership rights to work presented during a review and that agencies have chafed at such demands, but agreed in order to participate. The agreement states that agencies expect to retain ownership of any spec work developed for the client during a review, with a potential option for the client to purchase any work presented.

One issue not addressed in the agreement is liability for media purchased, but not yet paid for, if a client goes bankrupt or otherwise defaults.

Somewhat surprisingly, the 4A’s did not work with the ANA on the new document before releasing it. Matt Kasindorf, senior vice president, business intelligence and insight at the 4A’s, said: “We are working on a number of initiatives with the ANA and will be discussing a potential update as a joint document."

An ANA spokesman said the 4As “made us aware of the project, but due to other priorities we were unable to participate in its development.”