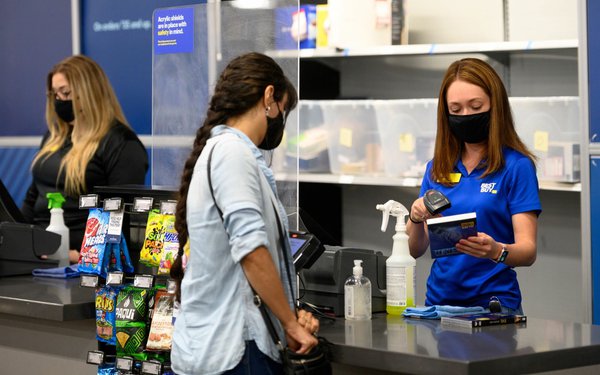 With its sharp increase in its outlook for the remainder of the year, the old-school retailer might have enough pluck to beat e-rivals -- even Amazon -- at their own game.

The Minneapolis-based retailer says sales for its second quarter reached $11.85 billion, up from $9.9 billion in the year-ago period.  U.S. revenue came in at $11.01 billion, an increase of 21% from the same period in the prior year. Net income for the quarter advanced to $734 million, compared to $432 million.

While the impressive gains beat predictions, the numbers some pundits are focusing on even more are the revised outlook for the year ahead. Besides hinting at a rosy back-to-school and holiday forecast, they also reflect Middle America’s increasing dependence on technology.

Citing a landscape in which consumers are increasingly investing in connectivity and technology, Best Buy predicts it will close out its fiscal year with between $51 and $52 billion and a comparable sales growth of 9% to 11%. Previously, it had anticipated gains of just 3% to 6%.

“We are fundamentally in a stronger position than we expected just two years ago,” says Corie Barry, Best Buy CEO, in its announcement.

Barry added: “There has been a dramatic and structural increase in the need for technology. We now serve a much larger install base of consumer electronics with customers who have an elevated appetite to upgrade due to constant technology innovation and needs that reflect permanent life changes, like hybrid work and streaming entertainment content.”

The robust report was enough to make Jim Cramer, host of CNBC’s “Mad Money,” remark that “Amazon’s death star days, they’re done. The remaining brick-and-mortar retailers have their force fields -- and they’re beaming Amazon’s projectiles right back at the once invincible digital retailer.”

Still, some experts believe that some of the company’s gains “are transitory and cyclical due to the pandemic and housing market strength,” writes Seth Basham, who follows the company for Wedbush Securities and currently rates the company as “neutral.” He adds that the surging Delta variant could help Best Buy if it leads to more at-home working and learning.

“Bigger picture, we praise Best Buy for its innovative tests and see potential for a more engaged customer base and a much more efficient and effective operating model in the future.”