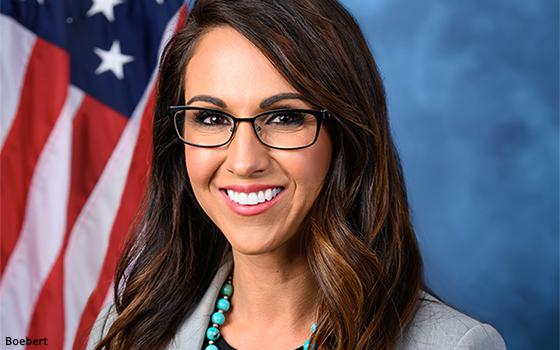 Representative Lauren Boebert, a far-right Colorado Republican elected to Congress last year, is urging a federal court to dismiss a lawsuit accusing her of violating the First Amendment by blocking a critic on Twitter.

In papers filed Wednesday, Boebert says the claims against her center on her personal Twitter account, @laurenboebert, which she created the day she announced her candidacy for office, and not her official House account, @RepBoebert. She contends that because the @laurenboebert is personal, she doesn't violate the First Amendment by blocking people from that account.

Boebert's argument come in response to a lawsuit filed earlier this year by former Colorado lawmaker Brianna Buentello, who says she was blocked by the Boebert after calling for her recall, and describing her actions on January 6 as “seditious.”

Buentello alleged that the block was a form of discrimination based on viewpoint.

U.S. District Court Judge Daniel Domenico in Denver previously refused to issue an injunction that would have required Boebert to lift the block. He said at the time that the block likely doesn't violate the First Amendment, writing that Boebert's use of Twitter doesn't amount to governmental action. (Only the government, and not private individuals or companies, are bound by the First Amendment prohibition viewpoint discrimination.)

The federal lawmaker is now urging Domenico to dismiss the lawsuit altogether.

“Boebert created the @laurenboebert account well before assuming her office in the House and she can at her pleasure keep that account once she leaves office,” her lawyers write in a motion seeking summary judgment.

Boebert adds in a separate declaration that she used her @laurenboebert account to “communicate with potential voters and other political actors,” as well as for fundraising.

She also says none of her Congressional staff have ever operated the @laurenboebert account.

Judges around the country have reached different conclusions about when government officials' Twitter use implicates the First Amendment.

Earlier this year, federal judges on the 8th Circuit Court of Appeals recently sided with a lawmaker in a separate dispute over social media blocks. In that case, the judges said the lawmaker's account was “personal,” and he therefore didn't violate the First Amendment by blocking a critic.

In that case, the judges rejected Trump's stance that the @realDonaldTrump account (which was taken down by Twitter earlier this year) was personal. Earlier this year, that ruling was vacated by the U.S. Supreme Court, on the grounds that the dispute over Trump's Twitter blocks became moot after he left office.

Buentello is expected to file a response to Boebert's newest court papers by September 15.