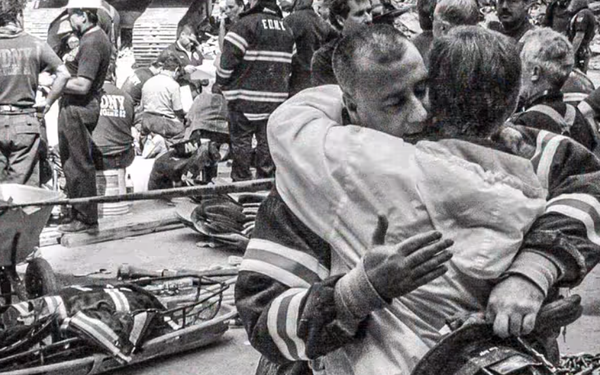 Saturday is the 20th anniversary of 9/11, but don’t expect too many ads commemorating the event.

One such spot, created by 911day.org, runs more than two minutes and encourages viewers to “Do your good deed at 911day.org."

The video features police and firefighters remembering the day “when people dropped everything to pitch in, to be a front-liner.” The video then urges those watching to take a moment to do a good deed this Sept. 11.

There are fewer ads commemorating the 20th anniversary of 9/11 compared to the 10th anniversary of the event, the worst terrorist attack on U.S. soil. In 2011, at least 10 advertisers, including Ortobom Mattresses and History Files magazine, ran ads.

Mini ran an outdoor ad in Toronto that said “Let there be Xenon,” with two beams of light symbolizing the towers as well as the car’s Xenon headlights.

And Budweiser ran a 60-second ad featuring a Clydesdale bowing before the silhouette of One World Trade Center.

A company rep said Bud is planning to re-release the "Respect" spot from 2002 where the Clydesdales bow in front of the New York skyline to pay respects to those lost on 9/11. The rep said  the film was re-released in 2011 with an updated skyline for the 10th anniversary.

The latest version of the ad will feature the completed One World Trade Center building in the skyline. It is is set at twilight to showcase Tribute in Light, a commemorative public art installation created by the 9/11 Memorial and Museum.

The ad’s end card has been updated to read “20 years later, we’ll never forget.” It will air during the Airforce vs. Navy game at 3:30 PM EST and the Yankees and Mets game at 7:40 PM EST on Sept. 11, and run organically on Budweiser’s social media channels.