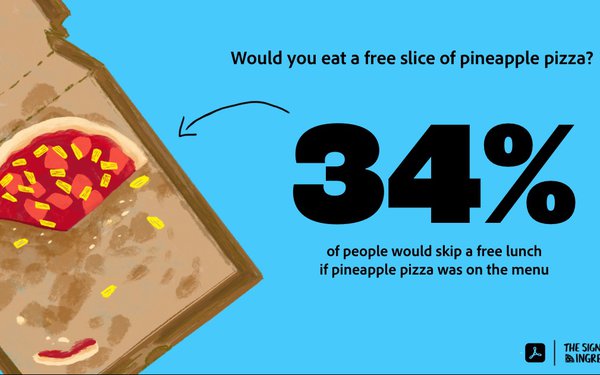 In Adobe’s Signature Ingredient Sweepstakes, consumers can sign in -- using Adobe Sign, of course -- to vote on one of America’s allegedly most controversial issues: whether or not pineapple belongs atop pizza. The grand prize is $2,000, which Adobe says will buy you a year’s worth of pizza, with or without the tropical fruit.

To help promote the sweeps, which runs through Sept. 21 and includes banner ads, native ads and sponsored content, Adobe has turned to a couple of its local pizzeria customers said to be passionate about pineapple pizza.

One of them is North Texas chain Zalat, which sells more than 2,000 “Pineapple Express” pizzas --- combining bacon, pineapple and teriyaki -- monthly.  Its owner, Khanh Nguyen, says that -- as the chain increasingly relies on online ordering -- Adobe products like Sign and Acrobat have helped it go 100% paperless “from signing contracts and leases to collaborating on menu updates.”

As a result of such efficiencies, Zalat is now on track to open a new location every month, Nguyen told Marketing Daily.

Adobe doesn’t plan to announce the results of its sweepstakes poll, but the software company had already surveyed 3,000 people nationwide prior to the promotion’s launch last month, and found  41% of them against pineapple on pizza (mostly due to a dislike of warm pineapple). This dislike can be intense, Adobe found, with 34% of people saying they’d skip a free lunch if it involved pineapple pizza -- and 20% of Gen Z and millennials saying they would not date someone who liked to eat pineapple on pizza regularly.

Competitors in the space, which has benefited from the pandemic limiting in-person signings and the trend toward virtual documents, include 18-year-old DocuSign and its eSignature feature.