Streaming's View-Time Edge Over Linear Up To 78 Minutes Per Week, 49% Have Shopped Online Due To Streaming Ad 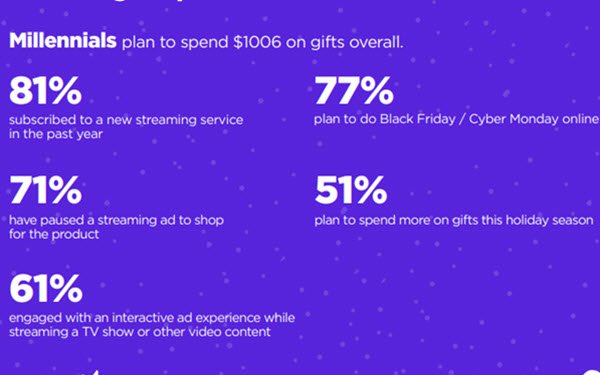 U.S. consumers now spend an average 78 minutes more per week streaming TV than watching linear TV, according to a new survey from Roku and The Harris Poll.

That’s up by five times from the 12-minute average advantage for streaming reported in last year’s survey, which was the first time the research found streaming time surpassing linear.

The annual survey probes consumers’ shopping intentions for this year’s holiday season, as well as their media consumption. This latest one was conducted online Aug. 16-20 among 2,007 U.S. adults who reported plans to shop this holiday season.

While 86% of consumers are streamers, one in three report not having traditional TV, including one out of two millennials and 44% of Gen Z respondents. Most (83%) boomer cord-cutters said that it was unlikely they would reactivate or purchase a new pay-TV subscription.

In addition, 49%of consumers overall, 71% of millennials, 63% of Hispanics and 51% of parents report having seen an ad during TV streaming that caused them to pause viewing to shop for the product online — a significant increase from 2020, according to the report.

Forty-one percent have engaged with an interactive ad experience while streaming, and 38% say they’re interested in sending a coupon code to themselves.

Five percent say they expect to make purchases using avoice-activated platform. That percentage, while small, has grown each year, according to the report.

More than half (55%) say that TV streaming ads provide “inspiration” for shopping. That’s still fewer than those whose purchases are influenced by word-of-mouth, but more than those influenced by general online product reviews.

The report stresses that the survey results point to a very strong 2021 holiday buying season. Not surprisingly, it also suggests that media buyers follow consumers to streaming services — including free streaming services like Roku — for holiday ad campaigns.

For instance, 56% of millennial shoppers, 54% of fathers and half of those earning over $100,000 reported being regular viewers of free, ad-supported streaming channels.

On the consumer confidence front, 72% overall said they believe the economy will improve in the next 12 months.

Fully 86% intend to spend the same or more this holiday season, and 36% overall and 39% of those who stream said they plan to spend more — again up significantly from 2020.

Overall, respondents expect to spend a record $937 on holiday purchases, on average — up 5% year-over-year.

Millennials — the generation that streams most, and has $1.4 trillion in annual spending power— plan to spend more than any other age cohort: $1,000-plus.

Nearly a third (32%) of respondents plan to purchase big-ticket items (over $500) this season, and 63% plan to buy technology/consumer electronics.

Consumers are also planning a return to bricks-and-mortar shopping, with 43% planning to shop in-store this Black Friday and Cyber Monday. That’s up 11% from 2020 (despite the COVID resurgence, which was well underway when the survey was conducted in late August).

Still, 57% plan to do most of their shopping online.

research, streaming, television
3 comments about "Streaming's View-Time Edge Over Linear Up To 78 Minutes Per Week, 49% Have Shopped Online Due To Streaming Ad".
Check to receive email when comments are posted.
Read more comments >
Next story loading