Flashback To Y2K Enlivens Start of 'Simpsons' Season No. 33 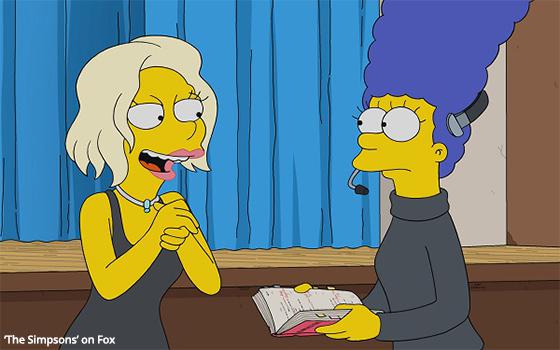 The season premiere of “The Simpsons” this coming Sunday night on Fox rates inclusion in the TV Blog by virtue of the show’s longevity.

The new season will be “The Simpsons’ ” 33rd, a remarkable achievement in television and, come to think of it, in any other endeavor too.

It is sheer coincidence that this TV Blog about a long-running prime-time show about to start its new season follows the blog published here a day earlier about another long-running show, “Law & Order: Special Victims Unit,” which started its 23rd season last night on NBC.

It is difficult to maintain a certain level of quality for 23 or 33 seasons (some might say it’s impossible), but as mentioned here in previous blogs about “The Simpsons,” this show’s creative process is aided by the fact that it is an animated show.

Thus, its characters do not age, while the show’s writers, producers, animators and voice artists -- all real humans -- do.

As a result, those working behind the scenes at “The Simpsons” have the creative freedom to wreak all kinds of havoc with timelines and chronology any time they want to.

In the show’s 33rd-season premiere, this time-shifting quality comes vividly into play in a storyline that flashes back to the end of 1999 and the pending arrival of the year 2000.

In this scenario, Marge, Homer and many of their Springfield peers are all still teen-aged students at Springfield High.

That’s a pretty good trick when you consider that we first encountered the Simpson family in 1987, at which time Homer and Marge were either already in middle-age or fast approaching it. Such are the benefits and privileges of animation.

The occasion for this nostalgic return to their high school years is the death of a long-time drama teacher who also supervised the high school’s stage productions, one of which -- an original musical -- looms large in Marge’s memory because she was the show’s stage manager.

Hilariously, this musical staged in 1999 just before the onset of the new year was a singing, dancing extravaganza titled “Y2K: The Millennium Bug” about the Y2K fear that gripped the nation back then, but today is so obscure that Marge can barely explain what the fuss was all about to her children Bart and Lisa.

And then -- yadda, yadda, yadda -- the now-middle-aged members of the cast agree to reunite to put the show on again. This brings the show’s standout star back to Springfield in a voice role played by the tireless Kristen Bell (seen in the above photo with Marge Simpson).

She was a very appropriate choice for the role because even if she rarely (if ever) sings in her many TV appearances these days on shows and commercials, she happens to be well-schooled in the kind of singing that is done on the Broadway stage, and she is amazing.

After 32 seasons (going on 33), we have certainly all seen our share of “Simpsons” musicals. But that being said, the creativity that goes into them has evidently not ebbed.

The episode has a number of original, satirical songs accompanied by choreography -- all animated, of course.

What’s missing, however, is the kind of hard-to-define (or describe) edge that “The Simpsons” once had when its comedy provided some of the most pointed, incisive commentary about our contemporary culture that appeared anywhere on TV.

I suspect that aspects of today’s contemporary culture -- call it wokeness, political correctness, cancel culture or anything you wish -- have cowed the show’s creators somewhat and dulled their edge.

Exhibit A in this hypothesis: The continued absence of Apu, the immigrant from India who was such an integral part of this show’s leading characters for more than three-quarters of its long history.

Apu was likely a student at Springfield High School in 1999 with all of the rest of the characters, but when it came time to reunite them for their old Y2K musical, Apu was nowhere to be found.

The 33rd season premiere of “The Simpsons”airs Sunday night (September 26) at 8 Eastern on Fox.