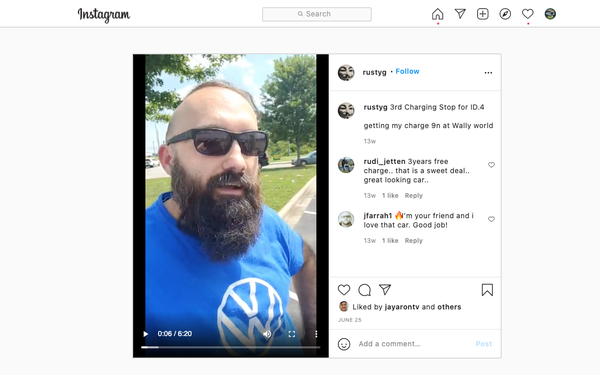 A cross-country road trip in a Volkswagen ID.4 EV designed to dispel preconceived notions about electric vehicles has touched down at its turnaround point in Los Angeles.

Two months ago, driver Rainer Zietlow and photographer Derek Collins took off from Herndon, Virginia with a mission to visit more than 600 Volkswagen Dealers in 48 states with Volkswagen’s first long-range EV for the U.S. market, the ID.4.

As of the halfway point, they had driven 22,303 miles and visited 418 Volkswagen dealerships across 36 states.

The journey continues along the southern half of the United States as Zietlow and Collins make their way back to the East Coast.

They will continue to chronicle the event at vwid4-usatour.com, where visitors to the website can also monitor the location of the ID.4 in real-time.

It’s more than a marketing stunt, but instead a chance to educate reticent consumers that road trips in EVs are entirely possible, especially since more charging stations are being added across the country.

VW is unique in its offering ID.4 buyers three years of fast public charging at Electrify America charging stations at no extra cost.

It’s a move that will help the automaker break through the ever-increasing selection of EVs.

Besides that, the ID.4 feels like the perfect vehicle for the driver who is used to calling out “Hey Google” or “Hey Alexa” to home devices or “Hey Siri” to an iPhone.

I recently had the chance to test drive the AWD version of the ID.4. Changing music, navigation destinations and even climate control is easy and you don’t have to take your hands off the wheel or your eyes off the road. It’s controlled by simple voice commands.

“Hello ID” natural voice control is standard in the ID.4. The car follows the instructions spoken by the driver and passengers and is capable of understanding many commands from everyday language, such as “Hello ID, I’m cold” to turn up the heat.

Perhaps the idea of a car that behaves like a cell phone or smart TV will attract some customers, as will tax incentives. But ultimately, in order to make inroads, automakers need to continue to “democratize” EVs, said VW of America President Scott Keogh.

It’s important that people in middle America want to drive them, like VW Chattanooga, Tenn. plant employee and Insta user Rusty G (Greer), not just consumers on the coasts, he says.

“Electrification in America is taking off,” Keogh recently told a group of journalists.

Legislation is fine, but you have to have consumer acceptance -- which is coming, he says.

“If you want to look at how you are doing in the car business, and how brands are doing...drop your kids off at school," Keogh says. "If you drove an electric car for the drop off four years ago, nothing. If you go there today in an electric car, parents are coming up and talking about it. This is the tip, you can feel it, without a doubt.”

Electrify America has the nation’s largest open DC fast-charging network with more than 650 charging stations and more than 2,800 individual DC fast chargers. The company expects to have more than 1,800 total charging stations with over 10,000 chargers in the United States and Canada by the end of 2025.

That’s a pretty good day of non-stop driving, almost as far as Detroit to Chicago. If you want to drive further in a day, at a public DC fast-charging station, with 125 kW charging, the ID.4 can go from five to 80% charged in about 38 minutes.

U.S. VW dealers also have a reason to smile: 68% of ID.4 buyers are new to VW and about 90% are new to the EV market, defecting from internal combustion-engine (ICE) vehicles.

About 70% of ID.4 sales are coming from digital reservations, Keogh says. That compares to an average of 5% online sales for other “non-exotic” brands in North America, he says.

“We always said our target was not to get into a street fight” over the current 200,000 current EV customers, he says. “That’s not the trick, the trick is to hit the 200 million who are sitting in ICEs.”