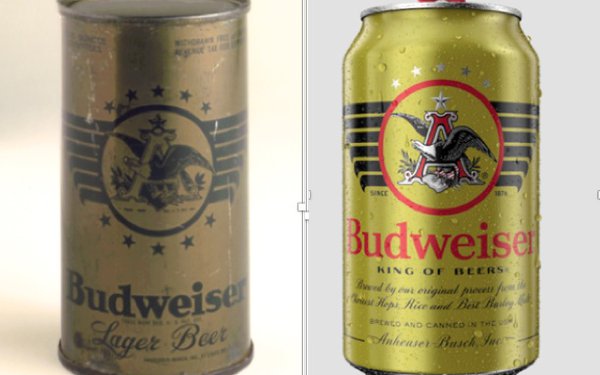 Budweiser cans are supporting causes on both sides of the pond.

In the U.S., the Anheuser-Busch brand is offering “military heritage” cans through Veterans Day, Nov. 11, with $1 for each case sold being donated to Folds of Honor, an organization that provides scholarships to spouses and children of fallen or disabled members of the armed forces.

The new limited-edition cans, meant to pay homage to Budweiser’s World War II cans, are gold in color -- reminiscent of domestic cans of that era, but not of the limited edition of millions of cans sent overseas to U.S. military forces.

Those special cans replaced Budweiser’s normal gold with olive drab, also the color of World War II Army uniforms and military vehicles. The olive drab served as camouflage, “to prevent light reflecting off the can and setting up an easy target,” according to “The Beer Cans of Anheuser-Busch," a booklet the company published in 1978.

(By the way, the military cans were meant to be buried after use, so very few survived the war. If you find one in your attic, note that one sold for $2,000 a few years back.)

Budweiser noted that over the past decade, it has donated $18 million--– or more than 3,600 scholarships -- to Folds of Honor.

Bud cans were made of steel until 1963, when aluminum took over.

Now, Budweiser in the U.K. has announced a pilot program to produce 5 million aluminum cans that will generate the brand’s lowest carbon footprint ever.

“We care about climate change, and want to make it as easy as possible for people to choose environmentally friendly options in their day-to-day lives,” said Mauricio Coindreau, sustainability director, Budweiser Brewing Group UK&I.

The low-carbon cans, which use new inert anode aluminum technology, are the result of a joint project between Budweiser, packaging giant Canpack, and aluminum manufacturers ElvalHalcor and En+ Group’s Rusal.

Since January of this year, Bud U.K. also said, it has brewed every single can, bottle and keg in the country with 100% renewable electricity from its own wind turbine and two solar farms.