Forecast: Disney+ To Overtake Netflix In Global Subs By 2026 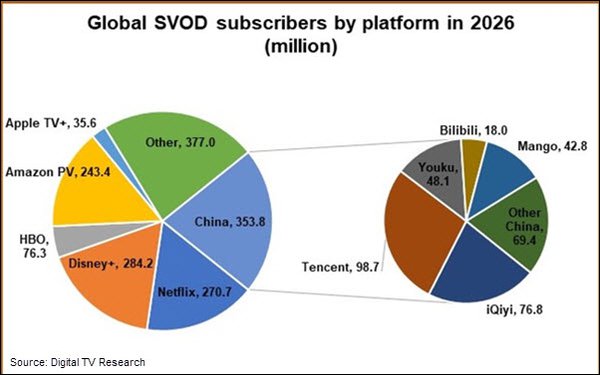 The report projects that Disney+ will add 140 million subscription subscribers between 2021 and 2026, to bring its total to 284 million.

Netflix is forecast to add 53 million subscribers, to reach 271 million by 2026.

Together with Amazon Prime Video, projected to reach 243 million, the three services will account for nearly half of the world's SVOD subscriptions within five years.

Total global SVOD subscriptions are forecast to increase by 491 million, to reach 1.64 billion by 2026.

Services from China will be subscribed to by over 350 million users. Of those, Tencent will be the largest with 98.7 million, followed by iQiyi (76.8 million) and Youku (48.1 million).

China and the U.S. had a similar number of subscriptions at the end of 2020, but China’s growth is slowing due to government pressures, while the U.S. will continue to grow — reaching 450 million subscriptions by 2026, explains Simon Murray, principal analyst at the research firm.