Maybe It's Time Social Media Conduct A Hearing Of Congress? 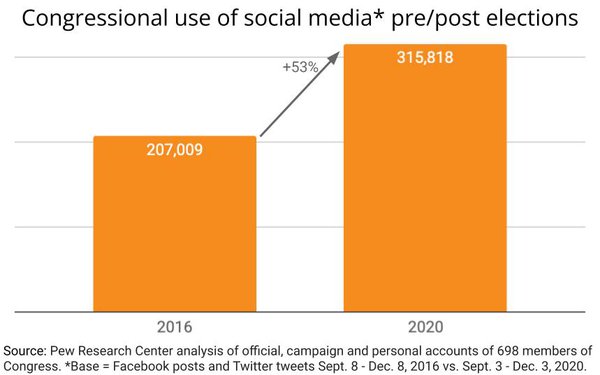 The timing of a just-released new analysis from the Pew Research Center couldn't be better.

The Pew report, which analyzes how much -- and in what ways -- 698 members of Congress have been using social media for themselves and their campaigns, comes as Congress once again is hearing testimony today from one of their personal favorite social media platforms: Facebook.

And while I'm not implying any explicit conclusions that might be contributing to their own biased perspective, legislators have definitely amped up their presence on social media over the past four years -- more than half again as much.

While the Pew analysis is limited to the periods pre- and post- the 2016 and 2020 elections, it shows the volume of their Facebook posts and Twitter tweets grew by 53%.

The report is telling in other ways, including the content and substance of posts between Democratic and Republican members.

One example: "Trump" was the top term posted by Democratic lawmakers, while among Republicans, well, not so much (see data below).

I'm guessing that has something to do with plausible deniability. But one thing there's no denying of is another interesting trend uncovered by Pew: A precipitous decline among Republicans containing links to other published sources.

"This decline was especially pronounced on Twitter, as the share of lawmaker tweets that included a link fell from 32% during the 2016 election to 26% in 2020. This decrease in the share of tweets that contain links during the presidential election study periods is part of a longstanding and steady decline over the past several years, and is most pronounced among Republican lawmakers," Pew's analysts note in the report.

While they don't try to explain that change in behavior, Pew does note that a relatively small share of popular domains represent the source of links from members of both parties, making me think that there is also a fair amount of confirmation bias taking place in those posts. 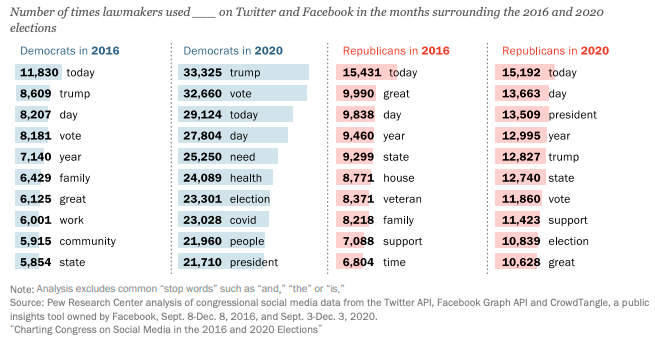