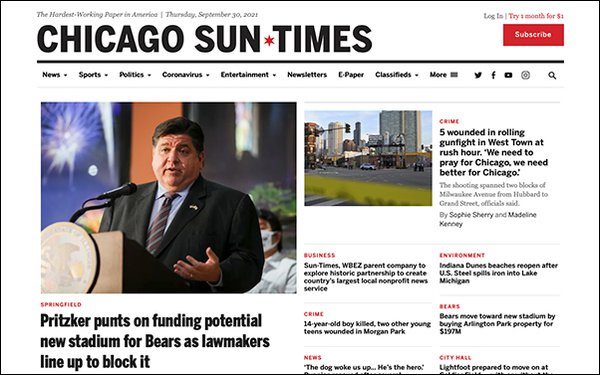 The Chicago Sun-Times and Chicago Public Media, the parent company of public radio station WBEZ have signed a non-binding letter of intent to complete a merger and create a nonprofit news organization.

If completed, the resulting entity would be one of the largest local nonprofit news groups in the country, the Sun-Times says in a story.

The new nonprofit “would invest in journalism through expanded capacity to better serve Chicago; expand and engage with diverse audiences throughout the region, and expand digital capabilities to deliver a compelling digital experience across platforms and reach audiences where they are,” says a news announcement.

Such a merger would create a safe haven for local journalists, while the Chicago Tribune newsroom staff is reduced. In the latest high-level departure, managing editor Chrissy Taylor is stepping down, effective October 8.

The goal is to complete the merger by the end of this year, says Chicago Public Media CEO Matt Moog, according to the Sun-Times. Moog says no staff reductions are contemplated.

The joint news release says early support for the plan has come from “Sun-Times investor Michael Sacks, the John D. and Catherine T. MacArthur Foundation and the Pritzker Traubert Foundation,” the Sun-Times reports.

As The New York Times notes, the Sun-Times is a rollicking paper that for years featured columnist Mike Royko. Royko walked to the Tribune when Rupert Murdoch, referred to by Royko as “The Alien,” bought the Sun-Times.