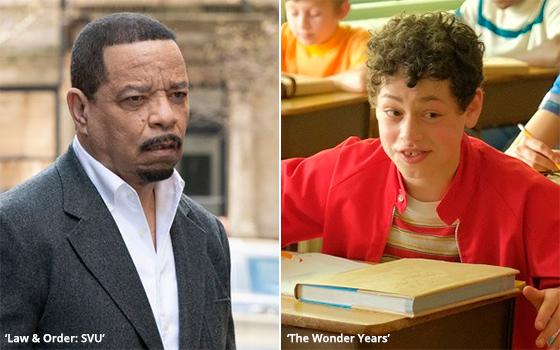 Comments made by characters in two recent prime-time shows struck me as out-of-place, inappropriate and offensive.

They were statements with racist and anti-Semitic overtones, respectively.

They were included in scripts for NBC’s long-running “Law & Order: SVU,” which started its 23rd season on September 23, and “The Wonder Years,” the new version of the old “Wonder Years” that premiered on September 22 on ABC.

I came across the statements as I watched the shows’ fall premiere episodes last month for reviews here.

These quotations have been sitting unremarked upon in my notes for the last two weeks or so as I wondered what to do with them, or whether they were worth bringing up at all.

In the end, I decided to write about them for two reasons.

One was last week’s column on anti-Semitism and the two TV personalities -- Nick Cannon and Charlamagne Tha God -- who made headlines in July 2020 for the anti-Semitic statements each of them made on their podcasts. And yet, they both have new talk shows on TV.

With that TV Blog in mind, I figured another piece about anti-Semitism on TV certainly couldn’t hurt.

The second reason has to do with the question suggested above: Are these two statements worth bringing up? After pondering the question for a few minutes, I came up with an answer: How should I know? That’s up to readers of this TV Blog, not to me.

One of these jarring statements was uttered on “Law & Order: SVU” by Detective Odafin Tutuola, the character played by Ice T (pictured above left).

When he said it, he and another detective were watching an opening-bell ritual at the New York Stock Exchange on an iPad. The group of people ringing the bell were white, and one of them was a congressman whom the Special Victims Unit was investigating.

After watching this group of people cheering the opening of another day of trading at the NYSE, Detective Tutuola frowned and said dismissively, “Nothing sadder than white people congratulating themselves.”

This statement stood out in such a way that I made note of it and wrote it down.

So, what are we to make of this statement heard on one of our top TV shows that zeroes in on the race of a group of people and then disparages them?

Meanwhile, the statement heard on the series premiere of “The Wonder Years” was about Jews. The statement suggested that Jews, as a group, make everybody else feel uncomfortable.

The new one offers a different point of view about growing up in America in that era. The new one centers on an African-American boy, also 12, and his family living in Birmingham, Alabama.

Now attending a new school dominated by white students, the boy, Dean (played by Elisha Williams), befriends a white boy who happens to be Jewish. Because of that, the Jewish boy, Brad (played by Julian Lerner, above right), is also something of an oddity at this school.

The adult Dean narrates the show, voiced by actor Don Cheadle. In one instance in the series premiere, the adult Dean reflects on his boyhood activism in which he tried to bring black and white kids together.

He then shared a comment his Jewish friend made at the time that was apparently intended as a compliment. Said the adult Dean, “Brad would later tell me that trying to make myself feel better by making everybody feel as uncomfortable as me was the most Jewish thing I’d ever done.”

Here again, this statement came as a surprise, and I clicked back a moment or two with my mouse to hear it again, since I was not even sure I had heard it correctly.

And sure enough, there it was: A line in a prime-time sitcom that, to me, suggested that the act of “making everybody feel … uncomfortable” was the “most Jewish thing.”

What are we to make of this? Is the show saying that Jews are an “uncomfortable” people whose presence, and the evident discomfort that goes with it, makes “everybody” else uncomfortable too?

Throughout history, various societies at various times have felt so “uncomfortable” (to say the least) living among Jews that they passed restrictive laws, relegated them to living in their own walled-off ghettos, and worse.

I realize this is just a line in some stupid sitcom. But nevertheless, it raised issues that for me, sorry to say, made me feel “uncomfortable.”