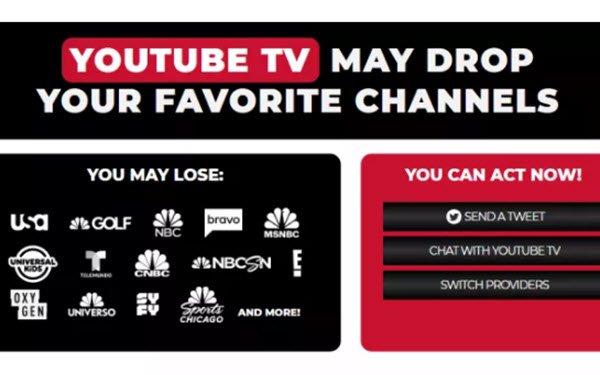 A looming YouTube TV blackout of more than 14 NBC networks and affiliates, including NBC regional sports networks, has been averted for the time being.

On Thursday, the last official day of the existing carriage deal between NBCUniversal and YouTube TV, the companies announced a last-minute agreement to extend the deadline and continue negotiations.

NBCU said the two parties had agreed to a “short” extension to continue talks, without specifying a time frame.

NBCU began warning YouTube TV subscribers on Sunday about a possible blackout starting September 30 (messaging shown above), and issued a statement claiming that YouTube owner Google is unwilling to pay the higher but fair rates it is asking for renewal rights.

Google responded by asserting that NBCU was not offering rates in line with those it charges other TV services of similar size, and adding that if the two failed to reach an agreement, it would cut its subscriber fee by $10 per month to adjust for the lack of access to the NBC networks and affiliates.

Behind the scenes, NBCU reportedly has pushed YouTube TV to bundle the Peacock Premium streaming service as part of a new NBCU channels affiliation deal.

In a research note, Lightshed analyst Rich Greenfield speculated that the main reason is that uptake of paid Peacock "has been underwhelming" to date beyond usage on Comcast/Cox set-top boxes. "With NBCU struggling with marketing Peacock direct-to-consumer (evidenced by their talking about ‘registrations’ vs. ‘paying subscribers’), they are falling back on their legacy business model of wholesale bundling to drive distribution," Greenfield wrote. "If they can force YouTube TV to carry Peacock, we suspect they will try to force other vMVPDs and MVPDs to do the same."

YouTube TV, for its part, has been rumored to have sought “most-favored nation” status guaranteeing that if NBCU gave another distributor lower rates, it would also have to match those rates for YouTube TV.

Google also noted to its subscribers that they have the option of paying $4.99 per month for Peacock “to continue watching NBCU content, such as ‘Sunday Night Football,’” but the threat of the virtual multichannel video programming distributor's subscribers losing the football coverage is considered one of NBCU’s strongest leverage points.