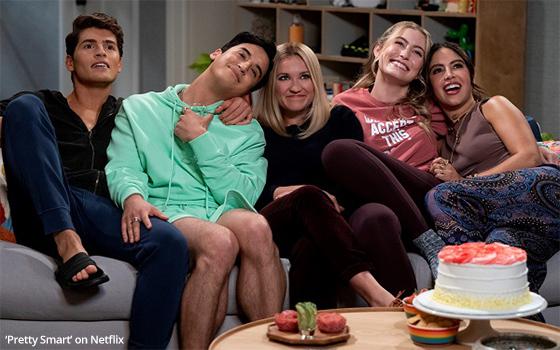 The photo above from the new Netflix sitcom called “Pretty Smart” was the trigger for the headline on this TV Blog, and part of its subject matter.

The photo comes from the selection of episodic images that Netflix has posted on its proprietary web site for TV scribes and editors to use in columns and stories.

This one really jumped out at me because, if I am not mistaken, a number of similar “couch” photos emerged from the NBC publicity department back in the first-run heyday of “Friends.”

This new photo from “Pretty Smart” provides a hint that the makers of this show may have had “Friends” in mind when they put this sitcom together.

It is about a group of 20-something friends who live in Los Angeles. That is one of the differences between this new show and the based-in-New-York friends of “Friends.”

But the show’s bubbly, 20-something attitude is the same as “Friends,” which marks this new “Pretty Smart” -- premiering Friday on Netflix -- as another in a long line of ensemble sitcoms that have tried to generate the same lightning as “Friends” for a new generation.

Based on the popularity of the original, which is still going strong as an SVOD attraction and in off-network syndication, trying to find the next “Friends” is a great idea.

But as they used to say at carnivals (supposedly), “Close but no cigar.” As noted here many times, one reason why “Friends” and its peer comedies from 1990s and early ’00s are so everlasting is because their audiences were huge, thanks to the power of network television.

That translates to a lot of affection for the show from a generation who came of age in the ’90s, plus, reportedly, millions of others who were too young to have seen “Friends” in its first run but for some reason have embraced it.

Today, however, nothing stands a chance of generating the kind of affection or mania that shows such as “Friends” and “Seinfeld” had in their first runs. or at the very least, such a show would have to be extraordinary indeed.

However, a show such as “Pretty Smart” can be judged on its own merits, even if a comparison with the basic outline of “Friends” is inevitable in this case.

In this show, there are five friends living together in a rented L.A. house. The premise is: One of the them is the super-smart Chelsea (played by Emily Osment), who suddenly moves from the East Coast to follow a boyfriend who has accepted an exceptional opportunity in L.A.

So, Chelsea decides to bunk with her ditzy sister Claire (Olivia Macklin) and her housemates for a few days. However, due to a turn of events Chelsea did not foresee, she ends up living more or less permanently in this house.

The situation in this situation-comedy is: Chelsea’s a brainiac, while her four housemates are not. In fact, when it comes to intellect, they are Chelsea’s polar opposites.

The character of Claire is a case in point. Macklin plays this character like a stereotypical, squeaky-voiced “dumb blonde” more common to old movies and vaudeville sketches than a contemporary TV comedy.

Pop culture reference: For a great example of this, see the nurse character in the “Doctor Sketch” performed by Walter Matthau and George Burns in “The Sunshine Boys.”

But once you get used to Claire, this show does the unexpected: It turns into a cohesive situation-comedy with a lot of heart and gentle humor.

It might not be “Friends,” but full disclosure here -- I never liked “Friends” anyway.