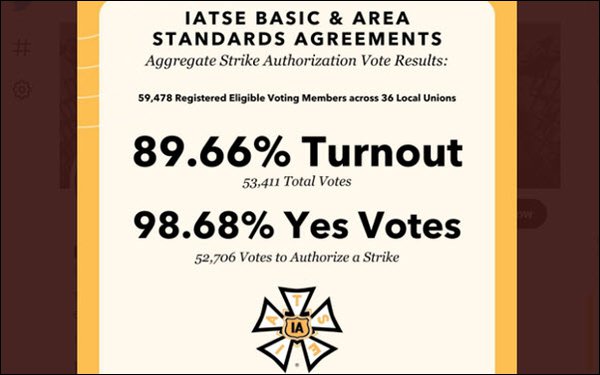 On Monday, members of the union representing film and television crews voted — for the first time in the union’s 128-year history — to authorize a nationwide strike if the union cannot reach an agreement with Hollywood studio owners.

The vote comes after months of failed negotiations between the International Alliance of Theatrical Stage Employees (IATSE) and the production companies’ representative, the Alliance of Motion Picture and Television Producers (AMPTP).

The union said that 90% of members voted and 98% of votes favored the strike authorization.

A strike would cripple entertainment companies’ ability to produce the robust stream of new content crucial to the success of their streaming services, as well as theatrical box-office streams, at a time when they are pushing to accelerate that flow following pandemic-driven production shutdowns and delays.

Following the vote, AMPTP issued a statement acknowledging this reality. “We deeply value our IATSE crew members and are committed to working with them to avoid shutting down the industry at such a pivotal time, particularly since the industry is still recovering from the economic fallout from the COVID-19 pandemic,” the group said.

Like the writers’ strike of 2007 to 2008, a crew workers’ strike would force industrywide production to grind to a halt.

Reaching an agreement will require “both parties working together in good faith with a willingness to compromise and to explore new solutions to resolve the open issues,” AMPTP added.

For its part, the union cites the burgeoning new streaming business — as well as the unprecedented physical and financial strains put on production crews during the pandemic, as studios pushed to complete as many projects as possible as quickly as possible — as among the reasons that workers are entitled to a new, more favorable contract.

The union wants a three-year agreement that would guarantee a larger part of streaming productions’ profits, as well as higher pay, meal breaks, and larger contributions to health and pension plans.

Up to now, streamers that say they have fewer than 20 million paid subscribers — including Apple TV+ and others — have had contractual latitude to pay production workers lower rates, based on the premise that the services’ profitability was uncertain.

IATSE’s contract with AMPTP, which started in 2018, ended July 31 and was extended until Sept. 10.

“The members have spoken loud and clear,” Matthew Loeb, president of IATSE, said in a statement following Monday’s vote.  “This vote is about the quality of life as well as the health and safety of those who work in the film and television industry. Our people have basic human needs like time for meal breaks, adequate sleep, and a weekend. For those at the bottom of the pay scale, they deserve nothing less than a living wage.″

“I hope that the studios will see and understand the resolve of our members,” Loeb added. “The ball is in their court. If they want to avoid a strike, they will return to the bargaining table and make us a reasonable offer.”