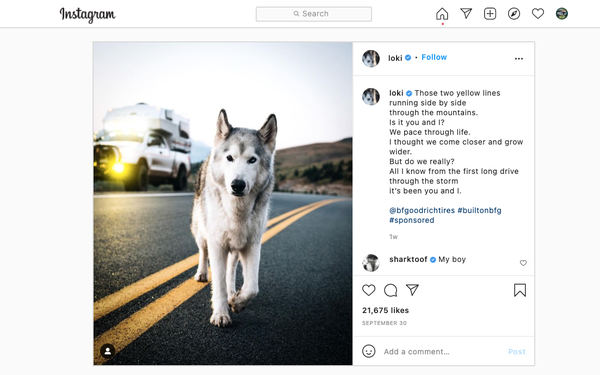 BFGoodrich has tapped six influencers and their pets to encourage consumers to explore the great outdoors with their pets.

Through Oct. 27, Consumers are invited to share photos of their outdoor adventures with their pets, tagging @BFGoodrichTires and using the hashtags #BFGTrailsandTails and #Sweepstakes.

Every qualifying photo will be entered for a chance to win a set of BFGoodrich Trail-Terrain T/A tires and a year-long pass to more than 2,000 federal recreation sites across the United States.

The pet/human bond was strengthened during the pandemic and the tire brand is urging consumers to continue spending time with four-legged friend as they get back out to the great outdoors, says Stephen Peters, BFGoodrich brand director.

The company is also offering tips from seasoned pet-loving adventurers for those who might be new to traveling with pets. Suggestions include being aware of wildlife and placing bear bells on your pet to alert wildlife of your presence and help avoid an unpleasant encounter.

The campaign is highlighting the company’s new BFGoodrich Trail-Terrain T/A tire, which is designed to resist chipping and tearing in occasional gravel-road usage.