Pardon Me, Would You Have Any La Moutarde Vin? 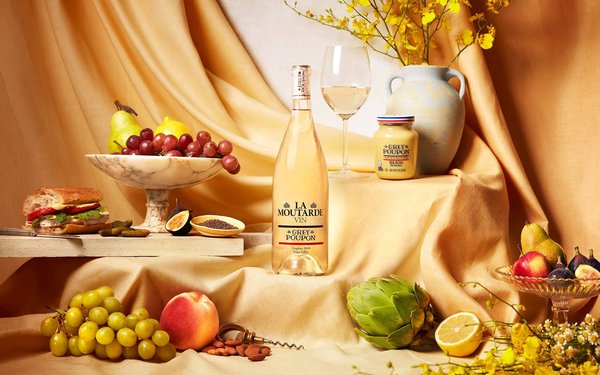 How long Kraft Heinz stays in the wine category is another question, since Grey Poupon’s new La Moutarde Vin is available only as a limited edition, and only from a special website, GreyPouponWine.com. For $30, buyers get not only a 750-ml bottle but also an eight-ounce jar of Grey Poupon.

While all Dijon mustards contain wine, Grey Poupon says most other brands use wine vinegar, not white wine itself, so that was the impetus for the La Moutarde Vin.

“When we first began development of La Moutarde Vin, we wanted to…celebrate the white wine used in our one-of-a kind Dijon …and give people a reason to slow down and savor their meals, especially lunch, which is often rushed,” Danielle Coopersmith, brand manager, sandwich enhancers, Kraft Heinz, told Marketing Daily. “We initially fell in love with this idea in early 2021 and we’ve worked to make it a reality ever since.”

The lunch dishes that Kraft Heinz suggests pairing with La Moutarde Vin include croque monsieur, Dijon maple-glazed salmon, or a beautiful meat and cheese charcuterie board.

While Grey Poupon says the new wine is inspired by its French heritage, it should be noted that the U.S. version of the condiment hasn’t used mustard from Dijon since 2016, and the wine likewise is not from Viognier’s original home in Southern France.

Rather, La Moutarde Vin is manufactured and distributed by NAPA Valley’s The Wine Foundry on behalf of Kraft Heinz and Grey Poupon. “Our collective teams — and sommeliers — participated in multiple rounds of tasting and fine-tuning to produce a white wine that’s as iconic as our Dijon recipe,” Coopersmith said.

The wine has also scored with The Drinks Business, which called La Moutarde Vin “well structured and well-made,” with “a light savoury spiciness which goes well with the more-rounded, less floral and very dry Viognier flavours. It seems like the wine would make a fine match with most poultry dishes.”

Kraft has owned Grey Poupon since buying Nabisco in 1999, and thus wasn’t involved in the brand’s long-running iconic ad campaign, “Pardon Me, Would You Have Any Grey Poupon?,” which began in 1981 and ran for over a decade. That campaign, from Marschalk (long ago absorbed into Interpublic), established Grey Poupon as a premium  mustard and was revived in 2013 by MDC Partners’  Crispin Porter + Bogulsky.