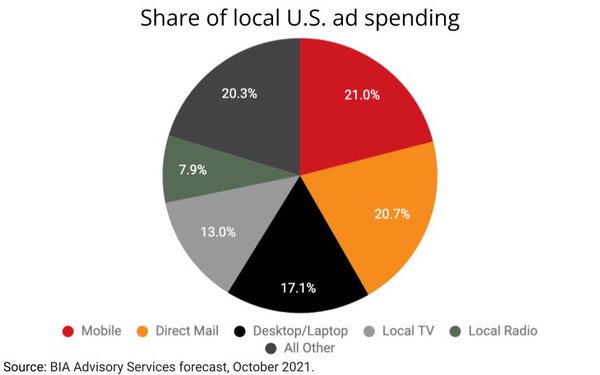 As some of you may already know, I don't consider mobile an ad medium, per se. It's a device people use to interface with media, some of which is ad-supported.

And since mobile is also increasingly the best available interface for many consumers, it's also becoming the dominant one they use to access advertising in many categories, including local ones.

So I was not surprised when the analysts at BIA Advisory Services sent me an advance look at their 2022 local advertising forecast, which not so coincidentally predicts mobile will overtake direct mail as the biggest source of local advertising.

“For a long time, we’ve been talking about direct mail as the king of the share of wallet in local ad spending,” BIA Managing Director Rick Ducey states in the revised forecast, adding, “This coming year, for the first time, we pass the crown over to mobile, as its momentum drives it to be the biggest overall piece of the spending wallet -- and we expect that to continue in the foreseeable future.”

Ducey says there are four main reasons why mobile is poised to take a dominant position of local ad spending now:

So to some extent, mobile's dominance is attributable to digital's even greater dominance. Based on BIA's categorizations, "digital" will account for a 47.6% share of local ad spending vs. "traditional's" 52.4% share in 2022.