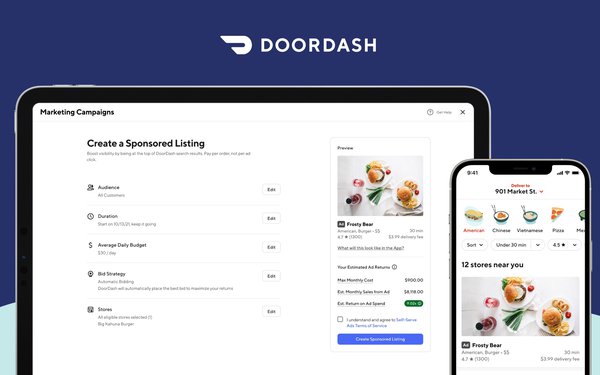 Starting today, DoorDash is ramping up its advertising offerings by allowing restaurants to bid for ads that appear atop the search results in its app.

As first reported by The Wall Street Journal, restaurants can purchase the ad placements via a bidding system and pay for them only if users click through the ads and place orders.

“The differentiating feature of DoorDash’s Sponsored Listings is that merchants pay only for orders placed via their ad and not for ad clicks or impressions,” a DoorDash rep tells Marketing Daily.

The move comes as DoorDash has had to increase its own advertising expenditures to recruit new Dashers—drivers who are also being wooed by companies like Uber.

In the second quarter ended June 30, the company said it boosted sales and marketing costs by over 150% from a year ago to lure more Dashers.

“And we also experienced higher advertising rates, likely because the ride-share industry and others were competing for Dashers in our pool,” DoorDash CFO Prabir Adarkar said on an earnings call.

Also today, DoorDash launched Featured Listings to enableCPG brands to boost placement in relevant categories within the DoorDash app. They appear as suggested products at the top of categories available from convenience or grocery stores—for example, Snacks or Dairy & Eggs.

As previously reported, DoorDash recently began to offer delivery of beer, spirits and wine in 20 states.

“At this point, the ad experience is almost an expectation and adds to the customer experience, since ads typically provide a promotion/savings opportunity,” Michael Bruh, vice president of customer success at SEO and content marketing platform Conductor, tells Marketing Daily.

“It would be a disservice to the DoorDash investors if they did not do everything possible to explore all related advertising revenue opportunities—of course while keeping the customer experience front and center.”